John Hughes: from young emigrant to Archbishop of New York

As he unveiled a ‘Blue Plaque’ last Saturday at St Macartan’s Church in Augher, Co. Tyrone in honour of John Joseph Hughes, Archbishop Eamon Martin described the achievements of the young Tyrone emigrant who went on to become the founder of St Patrick’s Cathedral in New York. 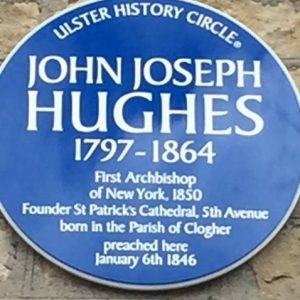 Erected by the Ulster History Circle, the plaque commemorating the first Archbishop of New York was unveiled by the Archbishop of Armagh on the 220th anniversary of Archbishop Hughes’s birth in 1797.

The young Tyrone man emigrated to the United States in 1816 at the age of 19; his father and elder brother had already made the journey just over a year earlier, and John Joseph travelled with his mother and his other siblings.

“It is very difficult to imagine what life in Ireland must have been like 220 years ago when John Joseph Hughes was born,” said Dr Martin, speaking at the parish church in Augher. “How can we possibly span the divide of two centuries that separate us from the days when, like so many others before and since, the Hughes family made the dangerous crossing to the New World?”

Having studied horticulture as an apprentice at Favour Royal Manor in Tyrone, when he arrived in America John Joseph started looking for work as a gardener and made several applications for a job at Mount St Mary’s Seminary in Maryland.

He was unsuccessful until representations were made on his behalf by Mother Elizabeth Seton, whom he had befriended – she is notable, because in 1975 she became the first native-born American to be canonised.

It was a fateful appointment, for at the seminary John Hughes was called to religious life, enrolled as a student in 1820 and was ordained a priest of the Philadelphia Diocese in 1826.

After serving as a curate in that ‘City of Brotherly Love’, he was sent to be a missionary in Bedford, Pennsylvania, where he converted several Protestants. He returned to Philadelphia in 1827, where he founded St John’s Orphan Asylum in 1829 and built the much admired Church of St John the Evangelist in 1832.

At this time he came to national prominence because of his participation in a series of debates about whether Catholicism was compatible with American republicanism and liberty – the arguments mirrored those on this side of the Atlantic involving Daniel O’Connell and the campaign for Catholic liberation.

In 1837 Pope Gregory XVI chose him to become coadjutor bishop of the Diocese of New York and he was consecrated bishop in January 1838. A year later, as Bishop John Dubois’ health declined, Hughes became apostolic administrator of the diocese, serving in that role until 1842 when Bishop Dubois died and Bishop Hughes succeeded him.

In 1850 he automatically became Archbishop Hughes when the diocese was elevated in status, and he served in that role until his death in 1864.

He was to become the best known American Catholic church leader of his time.

In New York he worked tirelessly to help those destitute and starving Irish immigrants who were arriving in their hundreds each week to escape the famine; he campaigned for the establishment of parochial schools and protested against the fact that the King James Bible was the standard text in use in the city’s public schools.

Throughout his life he campaigned for the abolition of slavery, and he also defended his flock against the anti-Catholic Nativist movement – at his insistence Nativists were not allowed hold a rally in New York after they had burnt down Catholic churches during rioting in Philadelphia in 1844.

He founded Fordham University, but his best known monument is St Patrick’s Cathedral on 5th Avenue, where his remains lie beneath the altar.

“People laughed when Archbishop Hughes began to plan a cathedral on what was then the remote 51st Street on 5th Avenue,” said Archbishop Martin. “They called it ‘Hughes’s Folly’, but time would show that, as on many other issues, Archbishop Hughes was ahead of the rest in anticipating the growth and future strategic importance of mid-Manhattan.

“The first Archbishop of New York was a distinguished and celebrity visitor to Ireland and Europe on many occasions – Cardinal Cullen invited him to preach at the opening of the Newman University Church in Dublin and he was an influential and persuasive speaker on many topical issues of the day.”

Thirty years after he emigrated to the US, he returned to Augher and preached at St Macartan’s Church on the Feast of the Epiphany, a fact commemorated on the plaque.

“This Ulster History Circle Blue Plaque, like many others across these northern counties, invites us to be informed about interesting and important people like John Hughes who lived among us and who have helped to shape history,” said Dr Martin. “It is an honour for me to unveil this plaque.”

The tenth Archbishop of New York Cardinal Timothy Dolan sent a message of good wishes to the unveiling ceremony, saying it was ‘a joy’ to be able to do so. “His achievements, coming from a humble background in Co. Tyrone, Ireland, from where he emigrated to the United States, are worthy of special mention,” said the Cardinal.

“Here in the United States, we owe Archbishop Hughes a great debt of gratitude and it is right that we reflect with pride on his life. May I wish you every success with your plaque unveiling to a truly deserving figure who became one of the most influential men of his time and won the respect of many. We just put up a bronze bust of him at the entrance to the Basilica of Old Saint Patrick’s Cathedral, so we are united in this tribute to a great man.”