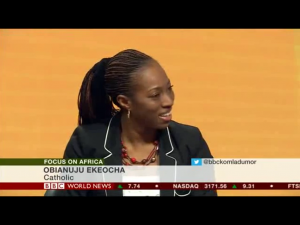 A new video produced by the founder of Culture of Life Africa lifts the lid on the activities of Marie Stopes International in African countries where UK tax-payers’ money is being used to provide abortion under the guise of ‘reproductive health services’ even in those countries where abortion is illegal.

According to Obianuju Ekeocha, who spoke at an Iona Institute event in Dublin last month, Marie Stopes International (MSI) works in 37 countries around the world, 16 of which are African countries.

MSI is the largest abortion organisation in the world, providing 3.3 million abortions and abortion related services every year.

The organisation performs more abortions and abortion related services each year than the US, Russia, France, Japan, England and Wales combined.

The new video, entitled ‘Killing Africa’, explains how MSI gets about £250 million every year from their donor-partners, which include many western governments and private foundations, such as the UK government’s Department for International Development, USAid, and Australian Aid. This is used to further their work in developing countries, particularly African countries.

The UK-based abortion organisation has set up clinics across Africa, in urban and rural areas alike, under the guise of ‘family planning’.

Critics of MSI warn that in many of these African countries abortion is not legal, yet the work of organisations such as MSI is not monitored, inspected or regulated sufficiently.

There have been reports of industrial-scale illegal abortion operations, desecration of foetal remains flushed down toilets or thrown into open sewage, accusations of mismanagement of funds, claims by African government workers of interference in African ministries of health policies and allegations of incentive bonuses awarded for increased numbers of abortions performed by centres in countries where abortion is not legal.

Some of MSI’s staff in Africa have also complained of being demoted, disciplined, intimidated or sacked when they raised objections about MSI illegal abortions.

The video speaks to one nurse, Desire Kirabo, who worked as an MSI centre manager in Hoima in the western region of Uganda.

She explains how she began working there thinking it was a family planning organisation but in reality was providing abortions. “[B]ut they disguised that”, she relates.

Soon it became apparent to her that “it was all about abortion”. Abortion is illegal in Uganda.

“As much as Marie Stopes disguised it as doing post abortion care, it does real abortions,” Desire Kirabo recounts in the video.

She also claims that women of all ages had abortions performed, but it was “mostly young girls, school-going girls” and that some of these girls were as young as 16 and no questions were ever asked about the circumstances of their pregnancy or whether they were the victims of rape.

“The main focus was the act – doing the abortion,” she said, and no time was given to the women and girls to consider their options or to explain to them what those options might be.

She also hit out at MSI, warning that its main mission was business focused and that at the end of the month, projections were done up as to the number of abortions achieved.

The nurse also highlights that MSI, while she was working for them, was not even using doctors to perform abortions and that the procedure used left the women crying out loud in pain. A radio was used with the volume turned up when a woman’s cries became too loud.

After the procedure, the women were given pain killers and antibiotics and sent home.

As to the baby’s remains, foetuses up to 14 weeks old were flushed down the toilet, while those over 14 weeks were thrown in a pit latrine. She claimed that during the time she worked at MSI, staff performed abortions on babies in the womb up to six months.

Marie Stopes was a renowned eugenist of her time.

Obianuju Ekeocha is the founder and president of Culture of Life Africa, an initiative dedicated to the promotion and defence of the African values of the sanctity of life, beauty of marriage, blessings of motherhood and the dignity of family life.

She has advised African bishops in different countries on women and life issues, and co-authored pro-life declarations with African bishops promoting the Gospel of Life in Africa.

Her writings and blog posts have been published on many online outlets, including the Vatican’s Pontifical Council of the Laity website, Catholic Online, Catholic Exchange, Catholic Stand and Life Site News, as well as print outlets such as the Catholic Herald.

She is a specialist biomedical scientist in haematology, working at a hospital in the UK. Prior to her current position, she was a medical laboratory scientist at the University of Nigeria Teaching Hospital.