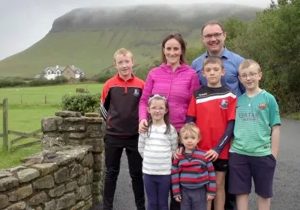 Therese and Jimmy O’Brien and family who appear in episode 1 of A Journey through Amoris Laetitia.

A six-part TV series based around the papal exhortation Amoris Laetitia (“The Joy of Love”) has been released by the World Meeting of Families.

Entitled A Journey Through Amoris Laetitia, the series features a variety of well-known commentators, as well as families from all walks of life and from around the world. Through the six episodes, participants reflect on what Amoris Laetitia has to say to families as they experience the ups and downs of family life. The series also looks at how Pope Francis addresses key themes like imperfection, mercy and society in his letter.

Each episode focuses on a different theme, moving – as the papal document does – from the reality of family life today, through to God’s dream for the family, to St Paul’s reflection on love, to families reaching out in solidarity to others and accompanying struggling families. The final episode deals with how families can “go forth in their families and in the world”.

“In preparing for the World Meeting of Families it was fairly obvious that the key document was Amoris Laetitia from Pope Francis,” Fr Bill Kemmy, one of the three series producers, told CatholicIreland. “That is a significant piece of work so it deserves unpacking. The Amoris programme is an attempt to help people read and maybe reflect on what Pope Francis has written for all of us before he comes.”

Contributors to the six-part series include Cardinal Luis Antonio Tagle, president of Caritas International; Jeff Cavins, author and speaker; Archbishop Eamon Martin, Archbishop of Armagh and Primate of All Ireland; Bishop Robert Barron, Auxiliary Bishop of Los Angeles; John and Claire Gabrowski, Pontifical Council for the Family; Sr Consilio, Cuan Mhuire; and several members of family-based movements like Teams of Our Lady, Focolare New Families and Retrouvaille. It is presented by Wendy Grace, who produced the series alongside Petra Conroy and Fr Kemmy. 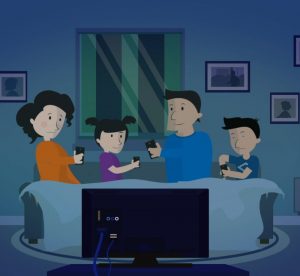 A Journey Through Amoris Laetitia, which is a co-production between iCatholic.ie and KAIROS Communications, is available to view on https://amoris.ie/tv/. The series is also being broadcast internationally through stations like Catholic TV, Salt and Light TV and EWTN.

Fr Thomas Rosica from Salt and Light TV, described it as an “excellent series to help us prepare for the World Meeting of Families. Thank you for allowing us to share it with Canadians from coast to coast to coast!”

Meanwhile, WMOF has also released a set of digital animations, also available to the public at https://amoris.ie/tv, designed to “provide accessible insights and reflections on the messages in Amoris Laetitia”.

The short cartoons by Kieran O’Brien, director of the digital storytelling agency Ministory, based in Wales, focus on how families can transform the world; love and mercy; families living as a reflection of the Trinity; love and imperfection; families and consumerism; and families living in a digital age. Each animation runs for around three minutes.

“There are different facets to the Amoris programme,” commented Fr Bill Kemmy. “We tried to have activities for kids in schools as well as older people who are engaged [in Church] but you are always trying to throw the net a bit wider. The animations are an interesting way of starting that conversation.”

Four additional animations, created specifically for children, will be launched at the World Meeting of Families 2018 Pastoral Congress in the RDS in August.