New entity will replace IMU and CORI this month 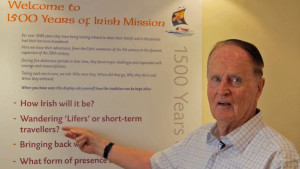 The coming together of the two bodies, the IMU and CORI, has been a matter discussed by the two organisations for well over a year.

The Association of Missionaries and Religious of Ireland (AMRI) is seen as a means of streamlining the resources that the two separate bodies hold at a time of declining numbers of missionaries and religious in Ireland.

Writing in the last issue of the IMU’s newsletter, Fr Hugh Mac Mahon recalled the history of the IMU which began in 1970 as an effort to meet the already changing needs of Irish missionaries.

There were over 7,000 Irish missionaries then, now there are 1,500 and according to the Columban priest, who served in South Korea and China, and most of these are over sixty.

In 1970, the focus of mission was still traditional Ad Gentes, ‘to the peoples of the world’.

This, Fr Mac Mahon explained, was a wish to help people in countries where the Church was still young to advance in their search for God and meaning, a yearning that was embedded in their culture from times immemorial.

“It meant offering them the words and example of Christ as a fulfilment, not the denial, of what their ancestor intuited.”

He continued, “Inevitably the missionaries got involved in meeting the people’s immediate needs, seeking social justice and showing concern for the environment. In practice this was done through establishing parish communities, schools and hospitals.”

The returned missionary said that through this close contact with people, the missionaries discovered that they themselves had much to learn about humanity, religion and spirituality.

“They benefited personally from the encounter but often had difficulty in bringing this enrichment back to their home Church.”

“The challenge today is no longer the easy-to-grasp goals of saving souls from darkness, or solving pressing injustices and material needs. Such tasks, and the building of churches and welfare institutes, have been passed on to others.”

“Now the challenge facing people all over the world is the secularisation and materialism of modern culture. Churches have been badly shaken by the impact and are coming to accept that the foundations on which faith was built may not have been as deep or reliable as they thought.”

If faith is to be renewed, according to Fr Mac Mahon, “they have to draw on their pre-Christian roots, realising that they too are Spirit-inspired, and also learn from the experiences, both recent and ancient, of other cultures.”

He said this is where missionaries are needed today and that it is not so much a new role as one that has been refocused and applied to a new situation.

The new approach to mission has been termed Inter Gentes (‘Between the Peoples’) rather than ‘To the Peoples’ (Ad Gentes).

“It calls for people who are confident that Christians have a privileged insight into ‘the Way, the Truth, and the Life’ and, as such, can be a fresh source of hope and inspiration in the world. But they also need the skills to listen, reflect and communicate despite language and cultural differences.”

He concluded by saying, “How they are to be prepared and coordinated is a task that the IMU passes on to AMRI, confident that the enthusiasm and energy that brought AMRI into being will find practical and forward-looking solutions.”