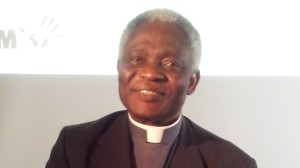 The Vatican announced on Wednesday the setting up of a new dicastery for Promoting Integral Human Development with the Pope himself taking personal charge of the department dedicated to migrants and refugees.

However, Pope Francis will only hold direct responsibility ad tempus or temporarily.

Explaining the decision to have the Pope play such a significant role, the Vatican said there cannot be a service to integral human development without special attention to migration.

The dicastery for Promoting Integral Human Development, like the dicastery for Laity, the Family, and Life, had been proposed by the Council of Cardinals as a step toward streamlining the work of the Roman Curia. It combines the roles of several existing offices into a single coordinated body.

Cardinal Peter Turkson, the president of the Pontifical Council for Justice and Peace, has been named as the first prefect of the new dicastery.

The creation of the new dicastery comes two weeks after Pope Francis appointed Bishop Kevin Farrell of Dallas as prefect of the Vatican’s new dicastery for Laity, the Family, and Life.

Pope Francis chose to set up the office as a dicastery without specifying whether it would have the status of a Vatican congregation. He approved the statutes for the new office “ad experimentum” allowing for modifications at a later date.

Since 2013, the Pope has created a new economy ministry to oversee the Vatican’s finances; a communications secretariat to unite the Vatican’s newspaper, radio, television, and press office operations; and an office for Catholic laity that merges previous offices of laity and family.

The new office is likely to be the most high-profile since the issues it deals with — the environment, migration, the sick, prisoners, modern-day slaves — are those closest to Pope Francis’ heart.