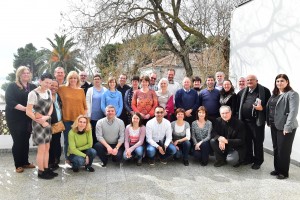 The conference, which takes place every two years was attended by representatives from more than 20 countries, and is the main opportunity for those working in child mission to come together, exchange ideas and develop new methods to develop and promote mission to children.

Jackie Pallas, National Secretary of Missionary Children Ireland, attended the CEME conference, as a member of its steering committee.

Among the highlights of the five-day conference was the involvement of up to 50 local children who took part in an interactive prayer service and dramatisations of the lives of St Therese of Lisieux and St Francis of Assisi.

The participation and presence of children was hugely welcomed and was seen as an important move in putting children central in the work.

“I felt that this was a most important decision. I have been to numerous CEMEs and this time there was an incredible sense of energy, family, of togetherness and a true sense of mission,” Jackie Pallas said.

“I was so happy that children, those on whose behalf we work, were placed right in the centre of the conference. I was delighted with this.”

She added that it was “fascinating to see what other countries are doing and we had ample opportunities to view and exchange materials that are being used in various countries”.

Many of those present said that they can often feel cut off and isolated, doing a job that can be beset by difficulties and obstacles and CEME gave them a sense of belonging.

“The spiritual side was lovely; we had several beautiful prayer services and many other contemplative moments.”

It was agreed that all countries would work together in common mission and share ideas and materials as well as keeping in regular communication.

Dr Baptistine Ramaboursin, Secretary General European Missionary Children, who is based at the Vatican said, “I really appreciate the new approach to mission for children, the new path that CEME has taken.  Already I see the results, so bravo one and all”.

The next CEME meeting will take place in Malta in 2018.

The Society of Missionary Children is the official children’s charity of the Catholic Church.

Founded in France in 1843 by Bishop Charles de Forbin-Janson, it aims to raise awareness and support of mission amongst primary school children.

Children are encouraged to pray together and for each other as well as their brothers and sisters in developing countries.

They are also encouraged to share some of their pocket money to help with the material needs of disadvantaged children.

Several events are organised by the society throughout the year including the National Day of Prayer for Children and Mad Hair Day.

In all up to 1,500 schools throughout Ireland are involved in various projects.