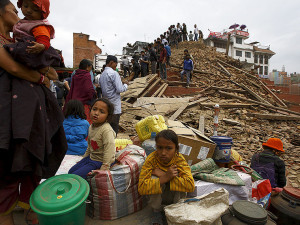 Nepal’s Catholic bishop has given a graphic account of the country’s catastrophic earthquake, describing how he was lucky to survive.

In a message on Monday (27 April), Bishop Paul Simick said he saw houses “falling like a pack of cards,” and that people “were running in all directions to save their lives”.

“It was a very, very frightening scene,” he said. “I myself had to literally run to save my life.”

The bishop, who is based in the capital Kathmandu continued, “Repetitive aftershocks – just now there was one, and I had to run away from my office – have made people frightened so they have left their houses and pitched tarpaulin tents on the streets and open fields.”

Though the latest estimates put the number of deaths at 5,000, the bishop added that local radio reports had predicted a rise in the death toll as more bodies are recovered.

He added, “I saw animals killed by falling cow sheds and stone walls. I saw the dry landslides after the shake all over the hills where I was.”

“Here in Kathmandu city, many Catholic families have cracks in their houses or major damage.”

Bishop Simick stressed the problems of trying to assess the situation on the ground, describing the crippling impact of communications breakdown, impassable roads, no domestic flights and entire communities still cut off.

Reporting on the suffering of Catholic communities, he described how some faithful had lost their lives in a mission station which takes three days by foot to reach.

“Yesterday [Monday], one helicopter went to see the place and victims but because of bad weather it could not land and saw nothing. Many of our churches, schools, convents and other institutions have developed precarious cracks.”

Trócaire has committed an initial €100,000 to the Nepal emergency response aimed at getting shelter, food and water to people left homeless as a result of last Saturday’s devastating earthquake.

The 7.9 magnitude quake destroyed buildings in the capital Kathmandu and flattened villages in the surrounding region, leaving 5,000 people dead and as many as 6,000 are injured.

According to the UN, up to eight million people have had their lives disrupted by the earthquake, the worst to hit the Himalayan region in more than 80 years.

Trócaire has launched an emergency appeal in response and has requested the public’s support to raise money to deliver aid to those who need it.