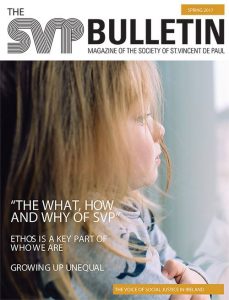 The Society of St Vincent de Paul (SVP) is to launch a revitalisation of its spirituality in every Conference.

Geoff Meagher, SVP, highlighted the initiative as he bid farewell in his last article for The Bulletin. His five year term as National President finishes at the end of May.

“We are unique in terms of our background and heritage; the feedback from our members is that we need to revitalise our ethos. In essence the message is that the HOW we serve those in need is as important as the WHAT we do,” he stated in his farewell message.

A new approach will link SVP’s prayer to a reflection and questions that members can discuss at Conference meetings. The SVP National Council strongly endorsed this approach.

“It should set the Society apart in terms of how we work with those in need; in addition it should minimise discord within the Society at all levels. This potentially has the most far reaching positive impact on the Society of all the changes made over the past few years.”

Caroline Fahey, Social Policy Development Officer, SVP, has also written about the ethos of SVP, stating that working for social justice is as pressing now as it was almost 200 years ago for Frederic Ozanam (SVP founding father) in Paris.

She quoted the founder: “You must not be content with tiding the poor over the poverty crisis. You must study their condition and the injustices which brought about such poverty, with the aim of a long-term improvement.”

SVP can look to Catholic social teaching to help understand and respond to the social injustices which SVP members are seeing on the ground.

“Catholic social teaching tells us that a basic moral test for society is how our most vulnerable members are faring. We are asked to recognise the dignity inherent in every person, to put the needs of the poor and vulnerable first and to work together in solidarity for the common good,” she wrote.

Challenging poverty and inequality can bring SVP into contested spaces and into conflict with ideologies that “benefit those at the top”, she wrote, and urged SVP members to return to the words of Frederic Ozanam:

“Look after people who have too many needs and not enough rights – people who demand with reason a greater say in public affairs, freedom from poverty, access to education and security in employment.” 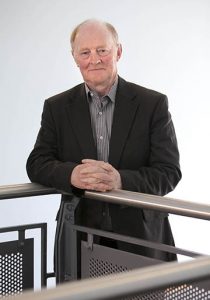 Geoff Meagher also highlighted the SVP’s proactive approach to social justice. The charity comments on issues that impact those it serves, meets with relevant Government ministers and officials and does research on relevant topics.

“Despite all of this excellent work, the inequalities in our country and globally continue to widen. We have tried over the past few years to encourage wider debates on the type of society we want and have supported a number of projects in this regard. However, the problems continue,” he stated.

He would like to see the Society, both nationally and internationally, comment at least once a year on the wider issues and decisions impacting on the lives of people and make recommendations for change.

“The Society is highly regarded, both at home and abroad; we have a seat internationally at the United Nations. We need to issue measured, well thought out and researched commentary that will encourage policymakers make decisions that will improve the lives of people and create a more equal society,” he stated.

He listed other achievements of area presidents in supporting Conferences and training. He encouraged volunteers to come forward for officer roles and Conferences to attract new members every year.

He highlighted how there has been better emphasis on “quality visitation”, spending more time really understanding the needs of those served and coming up with a plan that will get that person or family back to self sufficiency.

“We need to build on that success. We owe it to our generous donors that we use their donations in the best way possible; to do this we need to both reach out to those who may be reluctant to contact us, [and] also to really understand the circumstances of those coming to us for assistance,” he stated.

He expressed his sense of privilege to serve the society as National President and thanked members and staff across the country for their courtesy and encouragement over the years.