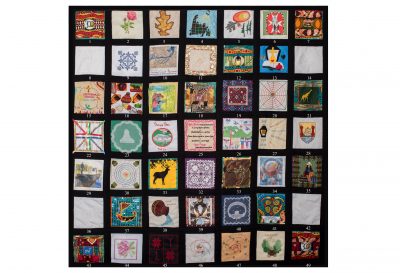 The quilt. Photo by Sean Jefferies.

Patchwork panels depicting everything from the zebras of Africa to the wheat of Ireland make up a quilt commissioned to celebrate the tercentenary of the birth of Nano Nagle.

The great response to the global invitation to submit patches bears witness to the history of the Presentation Sisters in craftwork, said Sr Mary Hoare, Director of the Nano Nagle Birthplace. “In the past many of our schools had needlework skills included as an integral part of their activities, and some, for example, South Presentation Cork, Youghal, Thurles and Galway, had a separate lace school attached,” she said.

At the unveiling of the quilt was Sr Aurea Dias, a native of India who is now on the Presentation Sisters’ Congregational Leadership Team, Monasterevin, and she said that each piece reveals a story of a people, their culture, identity, and life.

“Here in this place is where it all began over 300 hundred years ago. A spark was captured in the person of Nano Nagle whose dream ‘if I could be of service … in any part of the globe ..’ was carried by brave pioneering sisters from Ireland who ignited it on five different continents – Europe, North America, Asia, Africa, Australia/New Zealand, and Latin America,” she said.

She added that this quilt creatively brings everyone together as one – “all that diversity and rhythm of life from 23 different countries and grandly presents itself before us, as a feast for the eye of body and spirit. Fulfilling yet another dream of Nano: ‘there is no greater happiness than to be in communion.’”

The project was led by the Board of Management of the Nano Nagle Birthplace. It was implemented by local woman and board member Gertrude Magner, assisted by Killavullen Patchwork Group members Hilary O’Kelly and Julia Sheehan.

The quilt-making involved women from many countries who sat and worked on fabrics and with the skills of their native culture. Patches were received from Ireland, England, Slovakia, Zimbabwe, Zambia, India, Pakistan, the Philippines, Thailand, the Holy Land, New Zealand, Latin America, the USA and Canada.

It truly was a work of art to combine these together, as they varied in fabric, thickness and style. For example, there was hand embroidery from India, modern machine embroidery, Carrickmacross lace and Mountmellick embroidery from Ireland, crochet, applique, and sequins work.

As far back as 1825 it was recorded that the curriculum in the Presentation School in Galway included “needlework such as Limerick lace, Irish point and crochet”. The Youghal Lace Collar (1906) featured in the series “A History of Ireland in 100 Objects” in the Irish Times and the craftwork that created it was highlighted as “one of the more remarkable achievements of Irish women in the second half of the 19th century”.

Sr Mary Anne Smith had developed lace making in the Presentation School in Youghal in 1847 and it spread from there to schools in Kenmare, New Ross and other towns.

The quilt will be on display at the Nano Nagle Birthplace for visitors to see. It is accompanied by an information booklet explaining the source and meaning of each of the 49 patches. 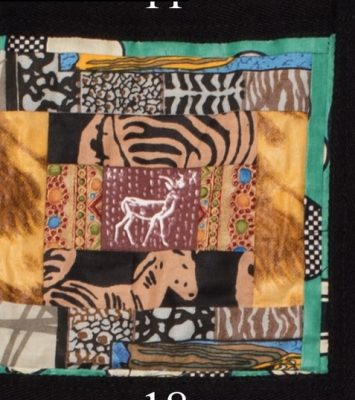 One patch on the quilt. Photo by Sean Jefferies.

From Pemba, Zambia, an African print from the Mumune Women’s Group depicts an antelope and zebra in an African background and symbolises the free and wild spirit that lives in everyone.

On the Pakistan patch Sr Norris Nawab used two materials. One from the Province of Sindh is used as shawls and in other clothes for men and women and comes in rich colours. The Punjabi material is used for wrapping bread for families.