Home > News > Cardinal thanks Ireland for “steady stream of priests”

Cardinal thanks Ireland for “steady stream of priests”

"How appropriate that a cathedral in the heartland of Ireland would be the first to bear that hopeful title, Christ our King." 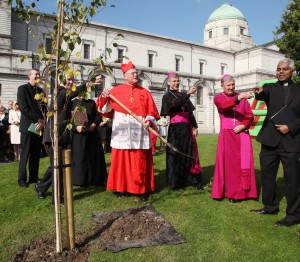 Papal Nuncio Archbishop Charles Brown, Bishop of Meath Michael Smith pointing out something to Cardinal Timothy Dolan as he plants a birch tree before the mass in Mullingar Cathedral. Pic John McElroy.

Cardinal Timothy Dolan of New York paid tribute to the “steady stream of priests” the Church in Ireland provided the Church in the US in the past.

Speaking in Mullingar where he was guest of honour and preacher for the 75th anniversary celebrations of the consecration of Christ the King Cathedral he described hope as the outstanding characteristic of the Irish Church.

Addressing the packed cathedral, Cardinal Dolan said, “This cathedral is an icon of hope: that the flame of hope ignited by Patrick on a nearby hill still burns; yes, reduced at times, even by self-inflicted wounds, but never extinguished”.

The Cardinal, who led the review of Irish seminaries in 2011 as part of the Vatican’s visitation to the Irish Church, urged the faithful to make “Long live Christ our King!” their prayer on the 75th anniversary of the solemn consecration of their “splendid” cathedral.

Addressing Bishop Michael Smith, Bishop Denis Nulty, as well as the clergy, consecrated women and men religious, and the people of the diocese, he congratulated them “for keeping the dream of Bishop Gaffney and Bishop Mulvany so radiant and real!”

Cardinal Dolan added, “And thank you for the high honour of asking this boy from America to preach God’s Holy Word this festive Mass.”

Elsewhere in his homily, the Cardinal praised a past archbishop of his home diocese of St Louis, Cardinal Joseph Glennon, who was born and raised in Ballinabrackey in Kinnegad. 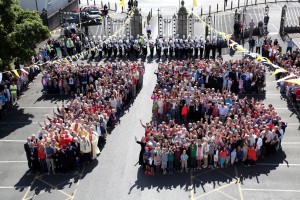 Cardinal Glennon preached at the opening of Mullingar cathedral in 1939 and later died in Ireland on his way back to St Louis after the consistory of 1946.

Earlier on Sunday morning, before Mass commenced, the Cardinal Archbishop of New York planted a tree in the grounds of Mullingar cathedral to mark the jubilee, watched by his former primary teacher, Irish-born Sr Mary Bosco Daly.

Cardinal Dolan credits Sr Mary and the Irish Mercy Sisters who set out from Drogheda in 1957 to run the Holy Infant Parish School in Ballwin, Missouri, with providing him with the initial religious formation which led to his vocation to the priesthood.

The New York churchman’s outgoing and easy manner proved popular with the 1,500 people he greeted and sat amongst at an outdoor street party on Sunday afternoon. He was presented with a hurley stick after Mass by a group of young Kilkenny fans.

The main celebrant at the Mass was Bishop Michael Smith of Meath and he was assisted by Archbishop Charles Brown, the Apostolic Nuncio, and Bishop Denis Nulty of Kildare and Leighlin, who has served in Mullingar parish for 10 years. 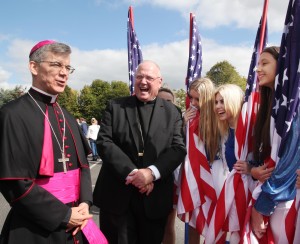 “How appropriate that a cathedral in the heartland of Ireland would be the first to bear that hopeful title, Christ our King.  This is an island, this is a people, this is a Church that has had a litany of earthly reasons to let hope flag,” he said.
He also noted the relics venerated in the cathedral which include:
–    the chasuble of St Oliver Plunkett, the martyr;
–    the primitive pewter oil stocks, monstrance, and chalice once hidden by brave and hunted priests during the dark penal days;
–    the 1717 Penal Cross which gave hope to persecuted believers;
–    the marble sculpture of John Cantwell, Bishop of Meath, who through gruesome famine and political crisis, ever the champion of the dignity of God’s people, was a sign of hope in a time it was doubted.

“Just look at the hope implicit in the invitation Bishop Gaffney gave the children who had survived the famine, then adults in 1900, to undertake the construction of this cathedral.”

“Just look at the hope evident in the gutsy confidence of those who gathered here three-quarters of a century ago to consecrate this church, only three days after Hitler had invaded Poland, the very day England declared war on Germany, with “blood, sweat, and tears” evident on the earthly horizon.” 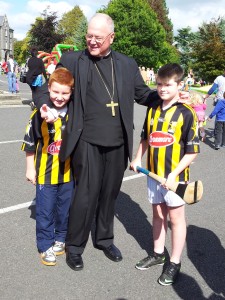 It was Pope Pius XI to institute the Feast of Christ the King.

In his homily, the 64-year-old Archbishop of New York said that “As that brave Pontiff gazed out upon the world, he saw threats to the Faith, crises in the Church; yes, the oppressors in Mexico, but also ominous ideologies called Fascism, Nazism, Communism, unrestrained capitalism, all claiming to make raw power, racial superiority, blood thirsty nationalism, economic clashes, or the almighty dollar the new deities, leading Pope Pius XI to thunder, Basta! Enough!”

In 1900, Bishop Matthew Gaffney announced that a new cathedral would be built in Mullingar to replace the one he called, according to historian, Fr Paul Connell, a “funeral pile, without an atom of art in it!”

It was his successor, Bishop Thomas Mulvany, who brought it to completion, accepting the advice of Pope Pius XI that it be dedicated to Christ the King, the first cathedral ever to bear the title.