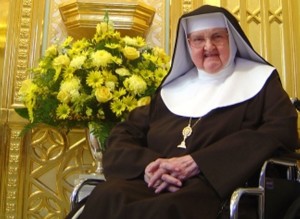 The condition of Mother Angelica, founder of the Eternal Word Television Network (EWTN), has declined in recent weeks and she is now being fed through a feeding tube according to a statement released by Our Lady of the Angels Monastery where she lives.

“The good part is that she now receives the necessary nutrients she needs.”

The sisters at the monastery say there have been “up and down moments” in recent months where the charismatic ninety-two year old has “suffered a great deal” but she accepts the suffering living her “Totus Jesu – All for Jesus” .

“I believe only in Heaven will you finally realise all the good your loving labour for God and His people have done for us all,” a mother superior recently wrote to  her.

In August, Mother Angelica celebrated the 71st anniversary of her entrance into religious life.

In the 1970s Mother Angelica began doing talks for TV.

In 1980, she converted a garage behind her monastery into a television studio and from there began recording programmes while she set in motion her plans for a cable TV network.

She purchased or got the use of pieces of land on mountain tops where she could place transmitters and on 15 August 1981, thirty-seven years after she had entered the convent, Eternal Word Television Network began to broadcast via satellite.

Initially airing five hours a day from 7pm to midnight, the service grew over time to 24 hours.

EWTN is now available to over 150 million television households in more than 140 countries and territories broadcasting Mass, devotional programmes, bible study and the study of Church documents, discussions on moral issues and documentaries like Robert Baron’s ‘Catholicism’.

It also does live broadcasts of the Pope’s journeys and important Church events. 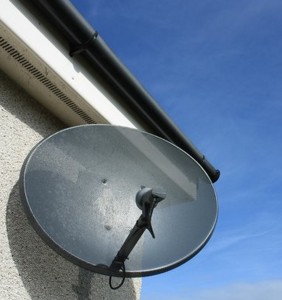 Anne Peer, Office Administrator with EWTN Ireland, says the viewership of EWTN is growing slowly over time in Ireland although it is hard to know how many people are watching at any given time.

“Sometimes we hear from people that they just ‘happened’ on the station as they were flicking through the channels,” she told CatholicIreland.net

Here the station is available on SKY channel 589, UPC channel 815, Eircom eFibre 589, Casey Cablevision 801 (in the Dungarvan Area) and online at www.ewtn.ie.

It is also available through a ROKU Box Internet TV and on free to air satellites: Hotbird and Astra 2 though Ms Peer noted the frequencies have recently changed.

EWTN Ireland also produces a number of programmes from Ireland, like talks from lay missionary Frances Hogan at the Maranatha Retreat in Limerick or Three Wise Women presented by Catherine Wiley, Dana Scallon and Kathy Sinnott who share “a lifetime of experience and wisdom rooted in faith and love, discussing the front line of business and family life with its joys and sorrows, and invite weekly guests to join in on the mix”.

Although Mother Angelica began the station, none of the sisters from the Poor Clares of Perpetual Adoration monastery in Hanceville, Alabama has continued her ‘front of house’ apostolate to the public, but the monastery prays continuously for its ministry.