Home > Featured > A female first: Catholic universities choose woman as their president for next three years

A female first: Catholic universities choose woman as their president for next three years 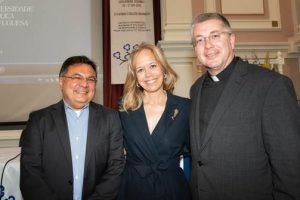 Dr Capeloa Gil’s election took place at the conclusion of the 26th General Assembly of the international federation, which was held this year at St Patrick’s College Maynooth.

Founded in 1967 as a result of a concordat between the Portuguese government and the Vatican, the Catholic University of Portugal, Universidade Católica Portuguesa (UCP), was Portugal’s first non-state university. Today, it caters for 12,000 students across 18 faculties, schools and institutes located in four major cities: Oporto, Braga, Lisbon and Viseu.

As well as being rector of UCP, Dr Capeloa Gil is Associate Professor of Cultural Theory at UCP. Her main research topics are German modern culture, inter-media studies and visuality and violence.

Accepting the post, Dr Capeloa Gil said she would “work to make the power of the few the strength of the many”. She also said: “I look forward to inspiring young women to take responsibility in the Church.”

The host of this year’s assembly, Rev. Professor Michael Mullaney, President of Saint Patrick’s College, welcomed this historic election and wished Dr Capeloa Gil every success in her term of office.

More than 200 university presidents, vice-presidents and international development officers from Catholic third-level institutions across the globe attended the meeting in Maynooth, which was on the theme ‘Catholic Universities, Working in Solidarity as Responsible Agents from the Local to the Global’. The Vatican was represented by Cardinal Giuseppe Versaldi, Prefect of the Congregation for Catholic Education.

Among many topics, the assembly discussed in particular how to bring Pope Francis’ Encyclical Letter of 2015, Laudato Si’, on care for our common home, into the very heart of this global network of third-level institutions by addressing issues linked to the social responsibility of Catholic universities.

The next General Assembly of the International Federation of Catholic Universities will be held in Boston in 2021.