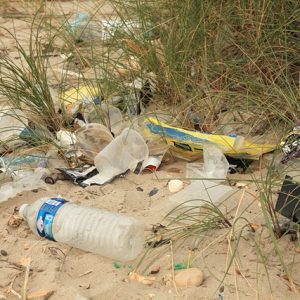 Rubbish, including plastic, on a beach.

The Medical Missionaries of Mary (MMM) are highlighting the damage being done to the environment by the indiscriminate use of plastic as part of events marking World Environment Day today, Monday 5 June.

The United Nations (UN) has been marking today as World Environment Day since 2005 and this year it is on the theme ‘Connecting People to Nature’.

This year environmental issues are very much at the top of the political agenda because of the decision by the President of the United States Donald Trump to renege on his country’s involvement in the Paris Agreement on Climate Change.

Among Catholic religious, environmental issues are very much to the fore because of Pope Francis’ encyclical Laudato Si’ (a copy of which he presented to Mr Trump when the American President was in Rome last month).

In the latest newsletter for supporters of the order founded by Irishwoman Mary Martin 80 years ago, the MMM’s director of communications Carol Breslin quotes from the encyclical: “Let ours be a time remembered for the awakening of a new reverence for life, the firm resolve to achieve sustainability, the quickening of the struggle for justice and peace.”

Her order is now backing “an unprecedented global campaign to eliminate major sources of marine litter: microplastics in cosmetics and the excessive, wasteful usage of single-use plastic by the year 2022”, the date announced by the UN Environment Programme (UNEP) in February this year.

“According to UNEP, each year more than 8 million tonnes of plastic ends up in the oceans, wreaking havoc on marine wildlife, fisheries and tourism, and costing at least $8 billion in damage to marine ecosystems,” writes Sr Carol.

“Up to 80 per cent of litter in our oceans is made of plastic. According to some estimates, at the rate we are dumping items such as bottles, bags and cups after one use, by 2050 oceans will carry more plastic than fish and 99 per cent of seabirds will have ingested plastic. At present about 15 per cent of species affected by ingestion and entanglement from marine litter are endangered. As many as 51 trillion microplastic particles – 500 times more than stars in our galaxy – litter our seas.”

According to the Medical Missionaries’ newsletter, ten countries have already joined the UN campaign: Belgium, Costa Rica, France, Grenada, Indonesia, Norway, Panama, Saint Lucia, Sierra Leone and Uruguay. The MMM’s want Ireland, which was the first country in the world to introduce a plastic bag tax, to join the campaign.

Sr Carol claims: “Today, we are producing twenty times more plastic than in the 1960s. By 2050 production will have to grow three to four times to satisfy our demand. About one third is used for packaging.

“The UNEP says that while much plastic waste ends up in vast mid-ocean rubbish patches, micro-plastics — tiny fragments less than five millimetres in diameter — are having a growing impact. Their ingestion has been widely reported in marine organisms, including seabirds, fish, mussels, worms and zooplankton. Transported by ocean currents across great distances, these particles eventually become a source of chemicals in our food.”

The Medical Missionaries of Mary list several ways we can all work to combat this menace: