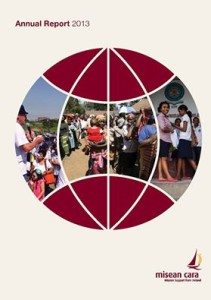 In 2013, Misean Cara managed €16 million in funding, mainly from Irish Aid, according to new figures published in its 2013 annual report.

Some 62 of its members applied for and 58 received funding.

€5.02 million was spent in education between 29 member organisations.

€2.612 million was spent in income generation and livelihoods among 19 member organisations.

One recipient was the Marginalised Children and Youth Project (MCYP) in Sierra Leone.

It was founded by the Christian Brothers, and includes training in digital photography, catering, IT, hairdressing and graphic design.

The centre is unique as both the programme’s director, Jonathan Foday, and the Senior Tutor of the IT programme, Barry Ali, are former street children themselves who were once supported through education by the Christian Brothers.

Also funded were the Sisters of the Sacred Hearts of Jesus and Mary who are working with the survivors and families of the victims of the El Mozote massacre in El Salvador.

The local community has struggled for 32 years for justice, and finally received acknowledgement from the state in 2012.

The capacity of missionaries is grounded in their faith-based values of justice, respect, compassion, commitment, and integrity, Matt Moran, Chairman of Misean Cara, stated in his Forward to the annual report which is now available the missionary body’snew website.

He highlighted how the role of missionaries in aid work was praised at the International Conference on AIDS and STIs in Africa (ICASA) last December by UNAIDS Director, Michel Sidibé, who said to faith-based organisations: “We can bring billions of dollars but they will not change society, it is your networks and capacities that will bring about change.”

The new CEO of Misean Cara, Heydi Foster, also took up this theme in her overview to the annual report.

Her initial months with Misean Cara involved meeting board, staff and members. She said Misean Cara has a ‘special’ place among development agencies as it is the only one solely provides funding to Irish missionary organisations to work with some of the most marginalised and poorest people in the world.

“Globally, more governments and international institutions are starting to recognise the vital role that faith-based organisations have played in delivering humanitarian assistance and promoting human development,” she stated.

Heydi Foster has experience as a Commissioner with the Irish Human Rights and Equality Commission and previously with the EU.

Governance was improved with additional external expertise introduced onto the Governance, Audit and Appraisal committees.

The Board is also serviced by L&P Trustee Services which provides formal induction training for new directors on their responsibilities under law.

A new departure in funding is a three-year Multi-Annual Funding Pilot Initiative which was introduced in the last quarter of 2013.

Through the Emergency Funding Scheme 22 projects were supported from nine members in seven countries.

Ten of the projects funded related to Typhoon Haiyan in the Philippines where the work of five members was supported and there was collaboration with Trócaire for increased effectiveness.

Founded in 2004, Misean Cara has membership of 89 religious and lay missionary organisations.

It aims to access, administer and distribute funds for the overseas development work these organisations as well as supporting them in every other way possible.