A support group for parents whose babies were given a poor pre-natal prognoses has hit out at two government ministers who voted in favour of Deputy Mick Wallace’s abortion bill over their failure to meet them and hear their stories.

One Day More held a protest outside the Dáil on Thursday to protest against the Fatal Foetal Abnormality Bill, which was voted down by 95 votes to 45. The Bill was attempting to introduce abortion for babies who have been diagnosed with a life-limiting condition.

Welcoming the bill’s defeat, members of One Day More criticised the way Alliance Ministers John Halligan and Shane Ross conducted themselves on the issue in recent days, and told media that the two Ministers had “spent the week talking about our children but never bothered to meet us.”

Speaking on behalf of One Day More, Sinead McBreen said, “It is not easy listening to government ministers saying our children had no right to the protection of the law. We can only assume they have never thought about just how hurtful and insensitive their remarks appear to us.”

She continued, “The fact that they would vote for an unconstitutional bill shows just how strongly they feel about stripping unborn babies with potentially life-limiting conditions of all legal protection.”

“As parents who received poor pre-natal diagnoses for our babies, we are extremely upset at the way members of the Oireachtas like John Halligan and Shane Ross spent the last week talking about our children yet they have never taken the time to meet with us. 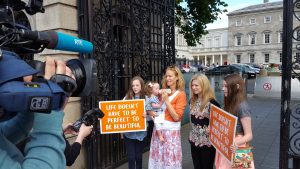 “In One Day More, some of our babies died shortly after birth, some before and some fortunately are still with us.”

“In my own case, we were told that our daughter Grace had a fatal foetal abnormality and that there was no chance she would make it to birth. We were pressured to abort her and told by medical staff ‘why are you carrying on with this pregnancy it’s not going anywhere?’”

“I was made to feel like a foolish mum and was told by hospital staff that I already had healthy children at home and that we should go for a termination to a ‘sister hospital’ in England.”

“We were also advised to pick a cemetery plot for our unborn daughter. I was devastated at the way we were treated and pressured to abort Grace who has Down syndrome.”

“Today, she is a happy healthy little girl that we think the world of. I think it is so wrong that there is a creeping pressure on parents in situations like ours to go down the road of abortion. If the Eighth Amendment goes, that pressure would greatly intensify.”

“As a country we should be spending more time looking for positive alternatives to abortion than focusing so much on changes to the law and Constitution that would take away the human rights of the most vulnerable and dependent children in our society.”

Sinead McBreen said the voices of families in One Day More and similar groups deserved to be heard as she stressed that there was no balance in the debate at present.

“We will keep pressing for fairness until it happens,” she said.

The Pro Life Campaign also welcomed the defeat of the Mick Wallace Bill.

Commenting on today’s outcome, PLC spokesperson Cora Sherlock said, “We are very pleased with today’s result. But what the debate in the last few weeks has shown very clearly is that some members of the Oireachtas are spending far too much time talking about abortion and spending no time on putting better resources in place to provide positive alternatives for families.”

She said an obvious example of this is the failure to make better perinatal palliative care services for families a priority.

Ms Sherlock said it was extremely disappointing to see some Ministers in government voting for the legislation even though they knew it was unconstitutional.

“These particular members of the Oireachtas have shown very little respect for the families of babies who have been pressured to have abortions and who are having to deal with the fact that politicians and others are trying to take away the rights of their children,” she said.