Minister’s comments on plurality in provision of schools welcomed 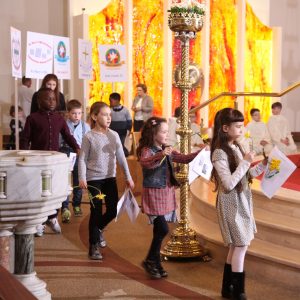 Schoolchildren holding daffodils and St Brigid’s crosses as they process for the opening Mass of Catholic Schools Week in the Church of Saints Peter and Paul in Portlaoise on Sunday morning. Pic John Mc Elroy.

The Bishops’ Council for Education has welcomed Minister Richard Bruton’s comments on the teaching of religion “with sacramental preparation in Community National Schools” and his comments concerning the plurality of provision of schools.

In a statement on Monday, Bishop Brendan Kelly, Chair of the Council for Education, said the bishops would study the Minister for Education’s proposals and would continue to engage with him, his department officials, and the Education and Training Boards.

Yesterday, Minister Bruton announced new plans to accelerate the provision of multi- and non-denominational schools across the country, “in line with the choices of families and school communities”.

According to the Minister, on current population growth trends, new schools will account for approximately one third of the additional multi-denominational schools required to hit this target, so transfers of existing schools from religious patronage will be required.

The new plans, which will provide additional multi-denominational schools in either of the nation’s languages, will be implemented alongside the current process, which was commenced through the Forum on Patronage and Pluralism under the previous Minister for Education, Ruairi Quinn.

That process identified a total of 28 areas where schools should be transferred through amalgamations and closures. This process will continue alongside the new process announced on Monday.

In his comments, the Minister said the new process will draw lessons from the previous model, which had only delivered a total of ten transfers to multi-denominational schools.

He said these lessons included the importance of working with the current landowner, school staff, school communities and local communities on a collaborative and open basis.

It also takes into account the downsides of amalgamation, closure and opening a new school as a model, given all the complexities, including legal complexities, that can be involved.

It includes the possibilities of live transfers, whereby a school continues to exist, with staff, pupils and the majority of the board of management remaining in place (if they wish), but patronage transfers from one organisation to another.

It considers the value of a lease arrangement from the current landowner to the new patron, removing the need for complicated property transfer.

The Minister said he and his Department had consulted widely with the main school landowners and different patron groups as well as a range of education stakeholders before developing the plans announced on Monday.

He has written to the bishops to outline his proposals and to seek their nominations to working groups which will need to develop detailed protocols for patronage reassignment implementation and school amalgamations.

Since Minister Bruton took office nine months ago, a total of 20 additional multi-denominational schools have been established or sanctioned.

“I believe that we should acknowledge the role of religious organisations in providing a system of national education for nearly two centuries. I also believe that a desire on behalf of many parents to have their children educated within their faith is welcome and should be respected,” Minister Bruton said on Monday.

Emphasising that Ireland has changed and continues to change, the Minister highlighted that while 96 per cent of the country’s primary schools are under religious patronage, only 66 per cent of marriages last year were religious ceremonies.

“Where the need for a transfer to a multi-denominational patron is identified by surveys, the existing landowner, in cooperation with the local school community, will decide what multi-denominational patron to transfer to. The transfer will be by way of a live school transfer, with existing staff remaining in place, where this is the wish of the parties involved. In most cases the new patron will lease the building from the landowner,” he outlined.

He urged all parties to engage in this process constructively, with a view to reaching solutions that achieve the wishes of all involved.

There will be two main stages to the new process.

Firstly, the identification phase. The Education and Training Boards, as the State’s local education authorities, will manage this phase. The ETBs will each identify towns or areas where there is likely to be demand from families for greater diversity and work with pre-school services to establish evidence of this demand among the cohort of pre-school parents, via surveys.

There will then be discussions between individual ETBs and the existing landowners concerning the possible transfer of existing schools to accommodate this demonstrated demand for diversity.

Each ETB will then prepare a report for the Department outlining the levels of demand within their functional areas and the responses of the existing patrons as to how this might be accommodated through the reconfiguration of existing school provision. This report will be published on the Department’s website, with quarterly reports on implementation.

There will be a role for the existing landowner in consulting with local community and school interests, taking into account proposals from different prospective multi-denominational patrons.

In most cases it is envisaged that transfer would be by way of voluntary live school transfer, rather than the amalgamation and closure model which was followed previously, with all of the complications, legal difficulties and time delays involved.

It is expected that in many cases the school property will be leased from the existing landowner.