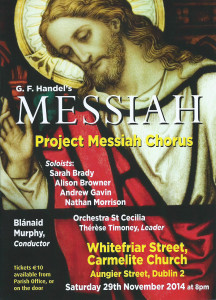 Handel’s Messiah is to return to Whitefriar Street Church with a new choir named ‘the Project Messiah Chorus’.

The well-known Carmelite Church of Our Lady of Mount Carmel on Dublin’s Whitefriar Street had hosted Our Lady’s Choir for its annual performances of ‘Messiah’ for a number of years until the choir moved its performances to the National Concert Hall.

Now the new choir, which came together just under eight weeks ago to meet the challenge of learning the music, will perform it next Saturday (29 November) on the eve of Advent.

When Blánaid Murphy, director of the famous Palestrina Choir, advertised for chorus members just two months ago she did not know what to expect.

The only qualification applicants needed was the desire to sing the much loved music.

“It has galvanised people to do something they thought they never could or would. The fact that we have an orchestra is great,” Blánaid Murphy told CatholicIreland.net.

“Whitefriar Street church is such a special place… the whole community there are very very excited and we are all very excited about it. It will be a very very special.”

The Project Messiah Chorus is made up of people from parishes and choirs from all around Dublin and places further afield like Carlow, Kilbeggan and Mulingar.

Up to 120 people ranging from those with a lot of choir experience to those who have never sung, and from age 12 to over 80, will perform the ‘Messiah’.

Soloists include Sarah Brady, Alison Browner, Andrew Gavin and Nathan Morrison and the music will be performed by the Orchestra St Cecilia led by Thérèse Timoney.

Last year was the first time such a choir came together and a similar number of people joined and sang at Our Lady of Good Counsel Parish, Mourne Road, Drimnagh.

“What developed was a great vibe in the diocese,” Blánaid Murphy said.

Choir members invited people from their own parishes both to sing and to attend the performance and it truly was a diocesan event.

This year, Blánaid Murphy and her organisers did not know what to expect but the singers came and they put in a lot of hard work.

Many friendships have been formed and the confidence and experience that the choir members have gained will return with them to their own parishes.

For example a young tenor in his teens has found new peers among a group of much older tenors, mothers of some of the Palestrina choir singers will  have their moment in the limelight and some older members of the choir have mastered the downloading of apps to help them prepare.

One of the Project Messiah Chorus is Gráinne O’Shea from Sutton. She is a mother of one of the Palestrina Choir choir members and recalls hearing her son sing the Messiah every year, and wanted to join in. Now she has her chance.

“I’m doing something that I always wanted to do,” she said. “My goodness doesn’t everyone want to learn it (Messiah)? It’s a big big deal.”

She has found it daunting and exhausting but looks forward to singing on the night and when her son appears in his concert nearer to Christmas she will be able to follow every note.

The performance on Saturday 29 November is at 8pm. Tickets are €10 – available from the parish office at Whitefriar Street Church and on the door.