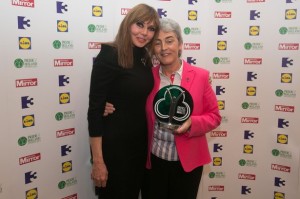 Sr Helen Culhane, who is Director of the Children’s Grief Project in Limerick, said she was delighted at the award for the project.

“I still can’t believe it but I’m thrilled to have been given this award because, apart from making me feel wonderful, it will get the word out about the vital work we do in grief counselling children,” Sr Helen said.

She added. “I think it brings awareness to the needs of children to be listened to. That’s what we do in Limerick, we listen to children.”

When Ireland’s children are in grief, Sr Helen Culhane is their lifeline.

The judges said: “Without Sr Helen many children would be struggling through grief and taking damaging baggage into adulthood which can only have a detrimental effect on them.”

Carol Vorderman was one of a number of celebrities presenting awards at the ceremony and she said afterwards to the Irish Daily Mirror, “Sr Helen’s story struck a chord with me.”

The TV star was deserted by her father when she was a baby, and admitted to becoming emotional as she heard of Sr Helen’s work.

After flying to Dublin in her own plane, the 53-year-old told the Irish Daily Mirror, “These awards brought me home.”

She was reduced to tears on-stage and back stage as she presented the Lidl Local hero award to Sr Helen Culhane. “Sr Helen’s story struck a chord, it’s just people don’t realise how much children keep to themselves.”

She added that children carry pain and grief for years if it is not tackled in childhood. The TV star was reunited with her father more than four decades after he left her and her mother. The former Countdown host said, “My mother was always great, but it can be very hard for a child”.