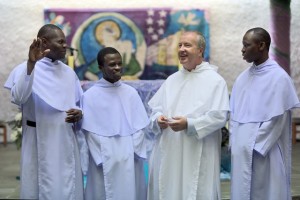 Three new members of the Presentation Brothers made their first professions on Saturday at the Church of the Resurrection in Killarney.

Brothers Sebastian Dery (26), Leonard Derbie (33) and McSimon Azenda (34), who come from Ghana and Nigeria, all studied and worked in other jobs before entering the order.

Brother McSimon from Benue State in Nigeria is qualified in maths and statistics while Brother Sebastian from the north of Ghana worked previously as a plumber and gas technician.

Brother Leonard, who is also from the north of Ghana, worked as a teacher before entering the congregation, which was founded by Blessed Edmund Rice in the nineteenth century.

The trio took vows of poverty, chastity and obedience before Brother Martin Kenneally, the Congregation Leader of the Presentation Brothers, in a ceremony attended by a large congregation of local people and well wishers.

The three men have been studying at the Presentation Brothers’ novitiate in Killarney since June. Their training programme involved a three-month multicultural experience in Ireland.

Speaking after the ceremony, the men admitted that Ireland took some getting used to. “The weather in Ireland is the first thing an African notices!” Br McSimon commented and added that the recent heat wave had reminded him of home.

“People in Ireland are very busy. It’s a challenge to speak about God in a culture where people have so many other distractions,” observed Br Sebastian, while Br Leonard noted that while “Missionaries came from Ireland to Africa in the past, now, I can see how missionaries will come here from Africa in years to come.”

During their time in the town, the three young men got involved in the local community. Brother Leonard served as volunteer with the Kerry Parents and Friends Association while Brother McSimon and Brother Sebastian helped out with the Kerry Diocesan Youth Service. The Brothers also read daily at Mass at the local Franciscan Friary. 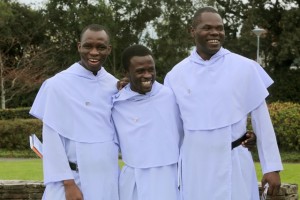 Brother Barry Noel, the novice master for the Presentation Brothers in Killarney, said that the men had brought great life to the Brothers’ community in Killarney.

“These are well qualified young men and it is very encouraging to see them take this step in religious life. Following the Gospel as religious brothers is a challenge but it is also very rewarding.”

He added, “Today we had three African men make first professions. Last year two Sri Lankan men were received into our novitiate here in Killarney. I encourage any men who are interested in religious brotherhood to get in touch.”

Earlier this year, Scoil Muire na Mainistreach (“The Mon”) in Killarney marked the 175th anniversary of the Presentation Brothers’ arrival in Kerry.

The three newly professed Brothers are due to return to Ghana later this month. There are currently nine men studying to join the order at the moment.

Anyone interested in contacting Brother Barry Noel can do so at:  [email protected] or visit www.PresentationBrothers.org