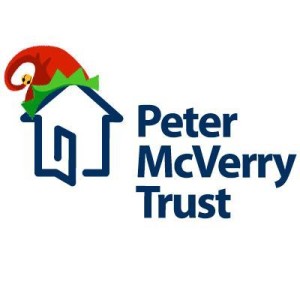 The Peter McVerry Trust has provided 50 extra beds for the homeless in the Dublin.

The supported temporary accommodation was opened yesterday in Dublin and also in Kildare.

The beds in Dublin, and another facility opened previously, are part of the promise by the Government that an additional 260 beds would be available for the homeless before Christmas.

“We are opening a 36 bed unit in Dublin city centre which will provide accommodation for single males and couples. This service will operate as a supported temporary accommodation service meaning that people will have a stable and secure medium-term placement of around 6 months,” Pat Doyle CEO of Peter McVerry Trust explained.

During that time Peter McVerry Trust will work to help people resident in the service to secure permanent accommodation outside of the homeless services, he said.

Pat Doyle said that this the McVerry charity’s first service in Kildare is a 14-bed supported temporary accommodation service located at Michael Garry House in Newbridge which will accommodate both males and females.

During the next few weeks there will be renewed efforts by the Peter McVerry Trust to launch more long-term housing projects in Dublin.

“While much of our focus has been on provision of short and medium-term accommodation in recent weeks, we have also done a significant amount of preparatory work on housing projects. We hope to begin work on some of these projects in January which will help provide permanent homes for people currently in homeless services,” said Pat Doyle

On RTE Radio One News, he said that following a meeting yesterday of the Dublin Region Homeless Executive and from visits to the homeless around Dublin he has seen that the numbers of those sleeping rough outdoors are reducing.

However vigilance is needed especially on Christmas night when temperatures of -4C are forecasted. 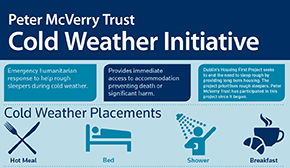 As the short term crisis eases, he said the focus must be on more permanent accommodation and the promised 32,000 social housing units.

The Government also needs to ensure that the promised 50% of allocations next year are for homeless people, he said.

Yesterday the Junior Minister for Housing, Paudie Coffey, said that the number of ghost estates or unfinished buildings around the country has dropped from 1,263 to 992 this year.

Many charities and experts have called for these empty houses to be made available to the homeless.

Of the remaining estates, 766 are inhabited and Junior Minister for Housing Paudie Coffey said they would concentrate on these ones.

He said 226 are total ghost estates with no one living there. Mr Coffey said the remaining estates had more technical, legal and planning issues.