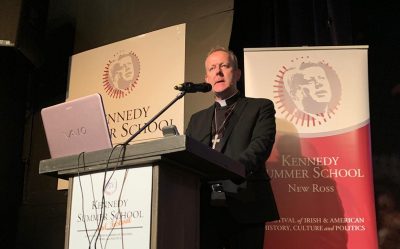 anniversary, Archbishop Eamon Martin of Armagh, the university’s chancellor, told graduates of his vision for the historic educational institution in the 21st century.

The archbishop was speaking at the conferring of diplomas and degrees in Theology, Philosophy and Education to 230 lay men and women on Friday, where he congratulated them by saying “May the favour of the Lord be upon us, and give success to the work of our hands”.

“As we celebrate this significant anniversary year, my vision is of St Patrick’s College, Maynooth, as a vibrant Pontifical University alongside a dynamic National Seminary and Centre for Ongoing Formation, both linking ever more closely with Maynooth University, to offer increased opportunities and insights for evangelisation and dialogue in 21st century Ireland,” he said.

The primate referred to  remarks made last week by Pope Francis to the International Federation of Catholic Universities in Rome, where the Pope said that in addition to providing answers, universities were also expected to produce “protagonists of the common good, to be creative leaders and leaders of social and civil life with a correct vision of humanity and the world”.

The archbishop also referred to President Michael D Higgins’s ‘Ethics Initiative’ of some years ago, which identified a need in contemporary Irish society for a debate on the ethical values and principles that we want to uphold and strengthen among both individuals and communities.

“Maynooth’s potential for such encounter and exchange is unique: three partner institutions, side by side on this historic campus, perfectly situated in one of most attractive and fastest developing towns in this country – the possibilities which all this offers for study, research community building and dialogue are endless!”

Addressing the graduands directly, he told them: “Do not see today merely as some kind of ‘passing out’ ceremony, ending your links with St Patrick’s College. Be part of our strategic vision by pledging to keep your links with the College wherever you find yourself – perhaps by continuing and extending your learning and achievements, or by encouraging new students to come here to enjoy the unique atmosphere and opportunities which this great College can offer, or by forging connections via distance or online learning from wherever you end up in Ireland or in the world.”