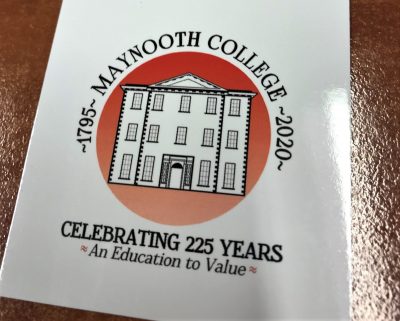 This year’s Christmas carol service in Maynooth holds a special significance marking both the golden jubilee of the carol service and coinciding with the 225th anniversary of the founding of St Patrick’s College.

The carol service takes place over three nights this week in the College Chapel. It opened last night and continues on Tuesday and Wednesday evenings.

Newly commissioned music is being performed as part of the celebrations by four choirs.

To mark the carol service’s 50th anniversary, a new carol, In the Stillness of the Night, which was commissioned from Dr Edward Holden, a lecturer in liturgical composition at St Patrick’s College in Maynooth, is being performed.

On Monday’s opening night, a special fanfare of Adeste Fideles, commissioned from Dr Ryan Molloy of the Maynooth University Music Department, was performed for the first time.

Each attendee at this year’s carol service is being presented with a bookmark to commemorate the Maynooth 225th anniversary and the golden jubilee of the carol service.

On the bookmark is an Irish poem Cuireadh oileánach do Mhuire (An Islander’s Invitation to Mary) written by Mártín Ó Díreáin, with a specially commissioned translation from the Professor Emeritus of Modern Languages at Maynooth University, An tAthair Breandán Ó Doibhlin.

This poem has been put to music by Ronan McDonagh and will be sung by combined choirs during the carol service.

Tonight’s (Tuesday) performance will be recorded by RTE Lyric FM and will feature some of the original founding members of the carol service and choral society.

Some of the carols performed in Maynooth will be broadcast over the Christmas season on Lyric FM.