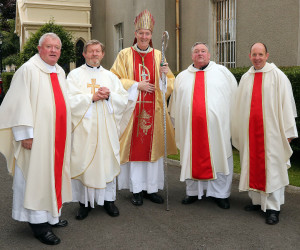 The Irish Catholic Church increasingly appears to be discovering the merits of older vocations, with three of this summer’s ordinations ranging in age from late 40s to mid 60s.

Heading the trend is Fr Seán Hyland, who at 66, is the oldest of this year’s crop of ‘mature’ vocations.

When he took early retirement at 58, Fr Seán was looking forward to playing golf and travelling with his wife Liz.

He never thought that within six years he would be ordained a priest by the Catholic Church.

The call to priesthood came when tragedy struck for the third time in his life.

After losing his little baby girl in 1975, when she was just two, his son died in 1977. The couple had no other children. Then in 2009, Liz, his wife of forty years was diagnosed with cancer.

The former electrical engineer with Hewlett Packard admits he was devastated by her death. “She was the light of my life. I just didn’t know what to do with my life.”

Faith had helped Liz through the loss of their two children and he turned to prayer during her illness and after she had passed away.

In 2010, he began studies for the priesthood at the Pontifical Beda College in Rome, which caters specifically for older vocations. Those men in their 50s and older tend, like Fr Seán Hyland, to be widowed and with either no family or their families have been raised.

At least six priests ordained by the Irish Church over the last few years have been seminarians from the college.

When Bishop Denis Nulty of Kildare and Leighlin ordained Fr Seán Hyland last Sunday, he said, “When it comes to entering the seminary it’s not about the age.”

Last Wednesday evening, Fr Seán celebrated his First Mass in St Michael’s Church in Portarlington, Co Laois. This is where his family are buried. 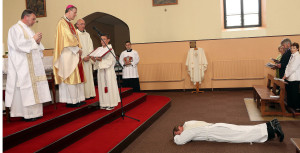 On the same day as Fr Seán was ordained, another ‘mature’ vocation was ordained in the diocese of Ferns. Barry Larkin is in his 40s and is a former Brother of St John of God.

On Saturday another mature vocation, Fr David Casey was ordained in Limerick.

Speaking to CatholicIreland.net, Fr Seán Hyland said, “Every day of my life has been graced since I began my seminary formation in Rome.” The studies took four years to complete.

He believes ordinary Catholics feel he can relate to their challenges as a man who was married and has a lot of life experience.

Before his wife died, he “had never contemplated being a priest. I had great regard and respect for the priesthood but I didn’t see myself doing it in any way.”

He adds, responding to the call to priesthood is not a matter of having a deep mystical or theological insight.

“I didn’t have either of those. I was an electrical engineer and worked in manufacturing industry. If you’d asked me before Liz died could a 60-year-old man be a priest, I would have said ‘no, and if it is possible, it is not me’. That was my starting position.”