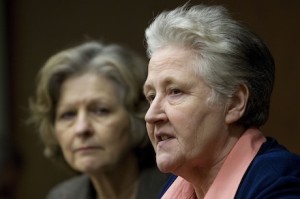 Irish clerical abuse survivor, Marie Collins, who is one of the 17 members of the Pontifical Commission for the Protection of Minors has said Peter Saunders’ leave of absence stems from a difference in understanding of the mission and the powers of the Commission.

Writing for the National Catholic Reporter in a personal capacity, Mrs Collins gave the first public response of a commission member to the controversy over the leave request for Saunders, a British abuse survivor and founder of the UK’s National Association for People Abused in Childhood.

In her NCR article, she states, “If a member cannot commit to work on policy development – which undoubtedly is laborious, tedious and slow – while the other members are deeply committed to it, an impasse is reached.”

“Any expectation that the Commission can attack or demand things of the Pope or insert themselves in particular cases ignores the actual mandate the group works under. I understand the frustration, the emotion and the anger about what is still happening and should not be! But it cannot be addressed by the Commission,” she said.

The Dubliner said that the “main issue was whether there was willingness to become engaged in the policy work of the Commission or not. When Peter could not commit or give a time frame as to how long he might need to reflect, then a lay member of the Commission proposed a vote”.

Recalling events she said the proposal was that he take a leave of absence to decide how he could contribute to the Commission.

“It was not a vote of no confidence. All present except myself voted for the proposal. I abstained but understood why my colleagues were voting in the way they were. I was very sad as were many others that it had come to this very difficult point.”

Marie Collins has worked on the Commission since its first meeting in May 2014.

“It has not all been plain sailing. I have concerns about what is happening in the Vatican Curia in relation to our work,” she wrote in her NCR column.

“As I said already I have every confidence in the Commission and its members. I do not have the same confidence in those whose task it is to work with us within the Vatican and implement our proposals when approved by the Pope.”

She concluded by emphasising, “I feel strongly that anyone criticising the Commission is choosing the wrong target.”

“If the Commission is damaged from within, these forces are the beneficiaries – not survivors or the children of the future.”