Home > News > Malala calls for education for all children at UN

Malala calls for education for all children at UN 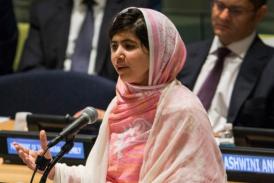 Malala Day at the UN in New York

Celebrations were held around the world for ‘Malala Day’ on Friday in honour of Pakistani schoolgirl, Malala Yousafzai, who was shot and seriously injured by the Taliban last October for going to school.

The 16 year-old, who was left for dead, celebrated her birthday on the 12th July with a speech to the UN highlighting her goal of education for all children.

“I am here to speak up for the right of education of every child,” Malala told the UN. She added that efforts to silence her had failed and she was now stronger and more determined than ever to pursue education for all children, especially girls.

“Weakness, fear and hopelessness died. Strength, courage and fervour were born,” she said of her ordeal. She called on politicians to take urgent action to ensure every child has the right to go to school.

“Let us pick up our books and pens. They are our most powerful weapons. One child, one teacher, one pen and one book can change the world. Education is the only solution. Education first.”

The speech at the UN headquarters in New York was the first public address that Malala has made since she was shot in the head while on the bus to school. After the shooting in Pakistan’s north-western Swat valley Malala was flown to the UK for treatment.

She now lives in Birmingham after months of hospitalisation and rehabilitation.

“I speak not for myself but for those without a voice,” Malala said on Friday. The Taliban “thought that the bullet would silence us, but they failed.”

She was attacked after campaigning against the Islamist Taliban’s efforts to deny women education.

Malala said she was fighting for the rights of women because “they are the ones who suffer the most”.

Former British Prime Minister Gordon Brown organised Malala Day as he is now the UN Special Envoy for Global Education. “Getting every girl and boy into school by 2015 is achievable,” he commented.

UN Secretary General Ban Ki-moon also addressed Friday’s session. He said Malala was a “hero” and “our champion”,  and added, “She is calling on us to keep our promises, invest in young people and put education first.”

The Malala Fund which was set up by the schoolgirl following the attack, also presented a petition with three million signatures to the UN secretary general demanding education for all.

Trócaire, in an article on its website, explained how inequality has led to two parallel societies in Pakistan.

Pakistan has one of the highest child illiteracy rates in the world. Driving through villages in Pakistan, the absence of schools is noticeable according to Trócaire.

Many young people never see the inside of a classroom at all, while those who do, find themselves in hugely over-crowded classes.

Trócaire funds Learning Resource Centres (LRC) that allow young people to secure an education. The centres are especially aimed at young girls, who often have to drop out of school due to pressure from their families.