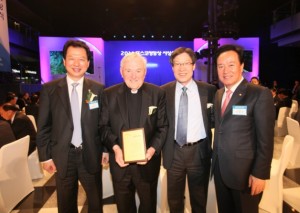 An Irish-born priest working in South Korea has received an award previously bestowed upon Nelson Mandela and the Dalai Lama.

Columban missionary Fr Noel O’Neill (84) from Catherine Street in Limerick City has been the recipient of the Manhae international award in South Korea for his work in helping people with special needs.

Fr O’Neill who has been working in South Korea since his ordination in 1957, founded the Rainbow Community which offers services to people with intellectual disabilities.

The Manhae award is named after the Buddhist monk Han Yong–Un, (1979-1944) a Korean independence fighter and a renowned poet who used the pen name Manhae.

Speaking at the function held last week in the Inje County Gangwondo province just on the border with North Korea, Fr Noel said “Just as the monk Manhae fought to free Korea from the bondage of Japanese occupation, so also the Rainbow Community struggled against society’s disinterest and prejudice towards people with special needs.”

He added, “If those institutionalised in large institutions throughout the country were given the opportunity for learning and training, they too could live with dignity in the local community and make their contribution to society.”

Born at 25 Catherine Street, Fr Noel came from a line of post office officials – his father Larry worked in the GPO, as did his grandfather, David Gleeson.

When he was just six years of age he was left with an indelible impression of how “doing something for the weaker members of society was a worthwhile way of life” when he accompanied his mother to the viewing of a movie about a Franciscan missionary working in a leper colony in Africa at St John’s Pavilion.

This film inspired him to embark on a missionary career. He attended CBS Sexton Street and later Garbally College in Ballinasloe and after school he joined the Columban seminary in Dalgan Park. He was ordained in 1956.

Fr Noel, was originally ordained for the Chinese mission, arrived as a missionary in South Korea in 1957, a short while after the Korean War.

While ministering in parishes, he began to “hear the cry” of the intellectually disabled peoples and in 1981 the international year of the disabled he left parish work and opened up the first group home in Korea.

He welcomed a few intellectually disabled people from a large institution to live with him in an ordinary residential house that was close to many facilities they would not have had access to.

Previously the only services available to them were in large segregated institutions far removed from the local community.

“Community based living was the beginning of a new lease of life for people with intellectual disabilities in Gwangju,” Fr Noel explained.

Since then he has been a champion for the intellectually disabled and has been involved in several special Olympics teams from South Korea.

Most notably leading the delegation from there to the Special Olympics in Dublin in 2003.