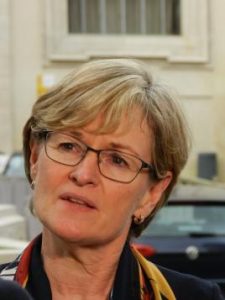 In her new role as First Vice-President of the European Parliament, Irish MEP Mairead McGuinness, has had a private audience with Pope Francis at the Vatican, Rome.

On Saturday 28th October during her meeting with Pope Francis, Mairead McGuinness discussed the future of Europe and her role as Vice-President with responsibility for dialogue with religious and non-confessional organisations.

“It was an honour to meet Pope Francis and to discuss my role with him. We talked about a number of issues and the importance of communication between the generations,” she said.

The MEP was in Rome for a conference entitled Christian’s contributions on the future of Europe, also attended by Frans Timmermans, First Vice-President of the European Commission, European Parliament President Antonio Tajani and Manfred Weber, Chair of the EPP Group.

“In his later address to conference attendees, Pope Francis highlighted the important role of those who produce the food we eat and make the clothes we wear, noting that these are essential roles to fulfil basic human needs but are often the sort of jobs that can be unappreciated at times,” Mairead McGuinness said.

In her own speech on the theme of “What kind of Economy for Europe in a changing world?” in Rome on 27th October, Mairead McGuinness called for an economy that is people-centred, built on solid foundations of diversity, and based on sustainability criteria taking climate change, resource efficiency, respect of nature and biodiversity into account and as she put it, “not one that is based on wanton consumption.”

The Midlands North West MEP, who formerly worked as a journalist specialising in agricultural topics, highlighted one issue that Pope Francis also raised saying, “The balance between capital and labour has shifted. Today we read of the exploitation of workers in the agriculture sector in Europe – those who provide our daily bread. Such exploitation is unacceptable in our Europe today and these sharp practices must be addressed, so that those most invisible in society – who care, who clean, who gather and grow are afforded the same dignity and respect as others in more high profile and higher paying roles.”

She added that the future European economy must be fit for purpose, and provide opportunities for all, including education, housing, health care and support.

“We are talking about a social market economy,” Mairead McGuinness said in Rome. On the issue of globalisation she said there is need for an economic model that is greater than the statistical analysis about return on investment. That model should put economic growth at the service of society and include fair taxation, with corporations contributing their fair share in order to provide social support. “Fairness, morality and ethics, must be part of the conversation,” she concluded.

Mairead McGuinness spoke at meetings involving Cardinal Reinhard Marx, President of the Commission of the Bishops’ Conferences of the European Community (COMECE) and others. 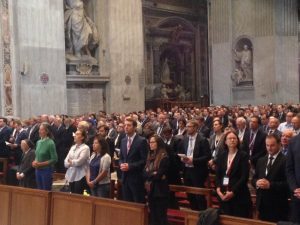 Noel Treanor, the Bishop of Down and Connor in Northern Ireland was also present at the three-day conference which had the theme “(Re)Thinking Europe —  A Christian Contribution to the Future of the European Project,” which concluded on Sunday with participants attending Mass at St Peter’s Basilica.

Bishop Treanor spoke to Vatican Radio about the Christian roots of Europe. He highlighted the impact of the Christian tradition and particularly Catholic social teaching, has made to the “initiation, the conception and indeed the implementation of the European project.”

Bishop Treanor said that parishioners in his diocese are concerned about the impact of Brexit on the economy, but it will impact on the future of family life.