Home > Featured > ‘Looking Good’ – a groovy guide to the habit

‘Looking Good’ – a groovy guide to the habit

They say that not even the Pope knows how many orders of nuns there are in the world, but a new guide should give the pontiff a better understanding of the symbolic and practical significance of the wide variety of habits that religious sisters wear. And if you receive a book token as a Christmas gift this year, then this book may be one way to use it!

Looking Good: A visual guide to the nun’s habit illustrates the different dress worn by more than 40 different communities of nuns and sisters, and the book tells the stories behind the different clothes they wear.

Produced by GraphicDesign&, a publishing house specialising in esoteric design, the guide is a collaboration between theologian Veronica Bennett, who tells the story of each garment, and graphic designer Ryan Todd, who has provided wonderful minimalist illustrations of each outfit.

The illustrations themselves are full of symbolism – for example, the orientation of the subjects is a clue as to how much the order is ‘in the community’ and how much its members lead cloistered lives.

Looking Good starts by cataloguing the various components that are used in the garb of Catholic female religious. These include habits, tunics, veils, coifs, medals, rosaries and sandals. Almost every female religious order draws from some but not all of these components it its daily uniform. Many of these types of garment then contain subtypes – for example, many orders wear some form of a girdle, while for others it is a belt, a cord, or a cincture, and the choice that is made is full of connotations. 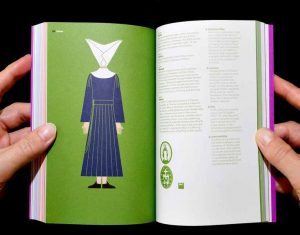 The Daughters of Charity of St Vincent de Paul are nicknamed ‘God’s geese’ because of their distinctive head-dress derived from caps once worn by French peasant women. (Pic GraphicDesign&).

Franciscan sisters, for example, wear a cord instead of a belt as a symbol of their vow of poverty. The cord has three knots to symbolise the vows of chastity, poverty and obedience, and each knot has five coils as a reminder of the five wounds of Christ.

An example of how religious garb has developed for practical reasons is the habit of the Sister Ministers of the Sick of St Camillus, who originally wore black but changed to white following the 1918 Spanish Flu epidemic and the increasing understanding of the importance of hygiene in preventing the spread of infection.

Often religious dress reflects local cultural custom. The Missionaries of Charity, founded in Calcutta in 1950 by Saint Mother Teresa, wear a traditional sari, albeit one that is white with a blue border, in keeping with normal day-to-day dress in India. In contrast, the Little Sisters of Jesus wear denim clothing when serving in the Americas.

The style website WIRED described the guide as “an unexpectedly groovy-looking book – this is the perfect stocking filler”. BBC Woman’s Hour described it as “a fascinating, insightful read”.