Home > Featured > Look what has started on The Late Late Show

Look what has started on The Late Late Show

A charity CD in aid of the Society of St Vincent de Paul has been launched by RTÉ’s The Late Late Show, featuring 40 live performances from the show.

The As seen on The Late Late Show double album features probably the most eclectic collection of musicians ever released on an Irish CD, with individual performances of particular interest to keen music fans of every genre. 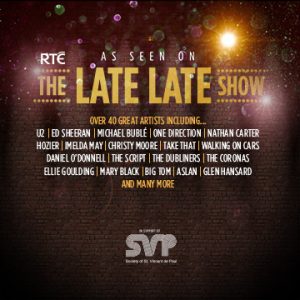 For example, one of the highlights is ‘Four Country Roads’ performed together by some of the biggest names in Irish country music – Big Tom, Daniel O’Donnell, Nathan Carter, Philomena Begley, Sandy Kelly, The Three Amigos, and TR Dallas.

Other team-ups include Walking on Cars and the RTÉ Concert Orchestra performing ‘Speeding Cars’, and Damien Rice and the Dublin Gospel Choir singing ‘Trusty & True’.

Finbar Fury, RTÉ Cór na nÓg and the RTÉ Concert Orchestra perform ‘The Little Drummer Boy’, which is to be released as a charity single in the run-up to Christmas.

For New Romantics, there is a solo recording by Midge Ure of ‘Vienna’, while lovers of folk will want to hear Christy Moore singing ‘Delirium Tremens’.

Other big names include U2, Michael Bublé, Robbie Williams, Ellie Goulding, One Direction, Josh Groban, The Script, 5 Seconds of Summer, and Ed Sheeran.

All artists and their record companies, and RTÉ, will donate their profits from the album’s sales to the SVP.

“This CD provides a very unique opportunity for people to help SVP provide support for those in need in communities throughout the country,” said the society’s national president, Geoff Meagher.

“SVP members visit thousands of individuals and families in their home environments to help those who need financial and emotional support at difficult times in their lives. Unfortunately, for many people visited today, their living environments are not their homes but hotels and B&Bs. The generosity of the Irish people is essential for this work. The funds raised will benefit and make a real difference to so many in need.” 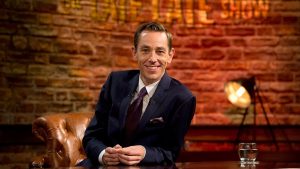 The Late Late Show host Ryan Tubridy said: “Ever since Gay first stepped onto The Late Late Show set so many moons ago, music has been a regular and critical part of the show’s equation. We have had the good fortune to welcome some of the best musicians that this country and, indeed, the world has to offer. We hope this CD reflects The Late Late Show’s rich musical heritage. The St Vincent de Paul is an incredibly impressive charity and a very worthy cause and I hope this CD will help them in their work.”