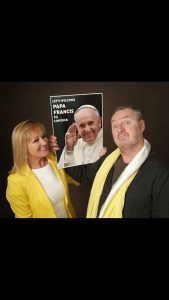 A Limerick singer is so determined that Pope Francis will visit her native city next year that she has enlisted the help of local celebrities to boost her campaign.

Last year, Crecora native Emily Clarke commenced her campaign for a papal visit to Limerick when she wrote a letter to the Vatican. Since then, Ms Clarke has also penned an original song for the pope, ‘Papa Francis’, which she sent to him.

The singer, who has fronted showbands since she was a teenager, sent the Pope a CD along with a lengthy letter promoting Limerick and inviting him to visit. The reply, written and sent on the Pope’s behalf by the Vatican, thanked her for her gift and confirmed that her letter was received.

Now a number of senior figures in Limerick have joined forces with Emily to try and encourage the Argentinian-born pontiff to visit a city which one of his predecessors, John Paul II, visited in 1979.

Speaking to the Limerick Leader newspaper, the Mayor of Limerick City and County Council, Cllr Kieran O’Hanlon, confirmed that he would be happy to extend an invitation to the Pope for a Limerick visit after hearing about Ms Clarke’s campaign. “I remember the visit of Pope John Paul II in 1979. There was huge excitement and a very warm welcome when he touched down in Greenpark,” he said.

Comedian Jon Kenny, a native of Hospital, also remembers the last papal visit, and said that he “would be delighted” if Pope Francis came to Limerick. “I support Emily Clarke’s campaign all the way. We have great memories of the last papal visit and I’m sure this visit would be equally supported. Limerick is enjoying a wonderful vibrancy now,” Mr Kenny, of ‘D’unbelievables’ fame, told the Limerick Leader.

Horse trainer JP McManus has also backed the bid, while TDs Niall Collins (FF) and Tom Neville (FG) said that Limerick had the infrastructure to facilitate the visit. “Limerick is very well placed to receive a papal visit and in doing so would make significant history as it would record the second such visit,” Mr Neville said. “I have early childhood memories of the last papal visit to the former racecourse in Limerick, the huge crowds being the standout memory.”

“On this occasion, the new racecourse in Patrickswell would be a very suitable venue adjacent to the motorway and well placed to cater for the crowds,” suggested Mr Collins.