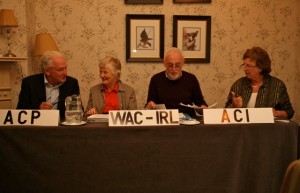 Three Irish Catholic reform movements are among 100 church groups worldwide who have written to the Pope to urge him to consider giving lay people a greater say in the running of the Church.

The letter was sent to the Pope ahead of the meeting of the eight cardinals to discuss reform in the Church’s governance structures this week.

In the letter, the alliance of reform groups, which form a worldwide network, offer to send a delegation to the Vatican to discuss their proposals with Pope Francis on dialogue and greater shared decision-making.

In their statement, the three Irish groups refer to Pope Francis’ recent interview with the Jesuit magazine America in which the Pontiff said “thinking with the Church” is not just a matter of taking orders from the hierarchy.

“When the dialogue among the people, the bishops and the Pope goes down this road and is genuine, then it is assisted by the Holy Spirit,” he said.

The five proposals contained in the letter include allowing the laity to select bishops and opening the way for qualified lay men and women to serve in the curia, including holding the office of cardinal.

They recommend that the Church undertake a canonical study of the feasibility of linking Church governance to baptism rather than ordination.

According to the reformists, it is “unjust” that the Church currently ordains married male ministers from other denominations while refusing to allow priests who left active ministry to marry to return.

However, the reformists steer clear of calling from women priests, an issue Pope Francis has said is not up for discussion.

Divorced and remarried Catholics should not be prevented from receiving communion the letter states.

Referring to the “catastrophic loss of trust” arising out of revelations of clerical sexual abuse and the cover ups which followed, the reformists ask the Pope to rid the Church of the “destructive effects of clericalism” and urge the Vatican to remove from office any bishops who facilitate or ignore abuse.

Brendan Butler of We Are Church Ireland, who was one of the 12 international drafters of the letter, told the CatholicIreland.net that he formulated the letter’s call for the reinstatement of theologians and priests who have been censured by the Vatican. He said they had in mind the six Irish priests currently censured or silenced by the CDF.

“We are not naïve to believe that these necessary reforms as outlined in our letter will see the light of day immediately, but we believe that the Spirit of God is alive,” he said.

Sr Dairne McHenry warned that “there is very clearly a division of status within the Church between those who are ordained and those who are baptised” and she said this had to change.

Separately, censured priest, Fr Tony Flannery of the ACP has called on the five congregations of the six Irish priests investigated by the Vatican’s CDF to come together and to lift all restrictions on the priests.

He said this would help clarify where Pope Francis stands on this matter and whether “his statements are mere words or something much more powerful.”