Trinity College Dublin will host a theological symposium later this month to reflect on the lasting impact and legacy of Martin Luther, who started the Protestant Reformation when he published his Ninety-five Theses in Wittenberg, Germany, on 31 October 1517.

As well as including reflections from Protestant and Catholic scholars, the symposium features a feast of choral music that would delight the music lover of any denomination.

The event starts on Friday 17 February, with reflections on the theme ‘It is for freedom that Christ has set us free’, a quotation taken from St Paul’s Letter to the Galatians.

Two of the speakers will be from the University of Tuebingen in Germany: Dr Volker Leppin, Professor of Church History in the Faculty of Protestant Theology, who will talk about ‘Mysticism, the Reformation and the Freedom of a Christian’, and Dr Gunda Werner, Professor of Dogmatic Theology in the Faculty of Catholic Theology, who will talk about ‘Love, Freedom and Guilt – Differences between Christian traditions in thinking the relationship between divine and human freedom’.

They will be joined by Dr Kajsa Ahlstrand of the University of Uppsala in Sweden, who will explore ‘Is it all about freedom? How disobedience became a virtue (even) for Lutherans’.

The first night’s proceedings conclude with a reception hosted by the German Embassy and a recital of choral music of the Reformation by the Goethe Institute Choir.

The event is being organised jointly by Trinity College and the Lutheran Church in Ireland, which is based at St Finian’s on Adelaide Road in Dublin. 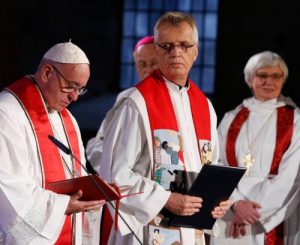 Last year, at the start of the Lutheran Quincentenary, Pope Francis travelled to Sweden for an ecumenical prayer service with Lutheran church leaders in Lund Cathedral on Reformation Day, 31 October. Although Martin Luther was excommunicated for criticising the Church, particularly the practice of selling indulgences, Pope Francis has praised Luther for his fight against corruption and greed in the Church.

Pope Francis said in Sweden that the Reformation helped give greater centrality to scripture in the life of the Church. A joint statement by the Vatican and the Lutheran World Federation said the two churches were “no longer strangers” and they were both working towards bringing members of both faith communities together at the Eucharistic table.

For more information about the symposium contact Aideen Woods, administrative manager at Trinity’s Irish School of Ecumenics on 01 896 4778, or by emailing [email protected].