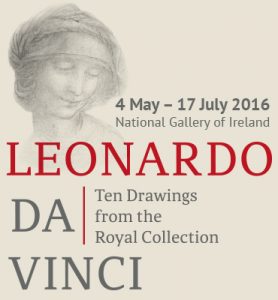 A  drawing of St Anne by the renowned Renaissance artist best known for The Last Supper and the Mona Lisa can be seen at the National Gallery of Ireland for the next few weeks.

The exhibition, Leonardo da Vinci: Ten Drawings from the Royal Collection, is in Dublin until July and features drawings carefully selected to reflect the whole range of the artist’s activities.

“This is a rare and wonderful opportunity for the Gallery to show these exquisite drawings by Leonardo da Vinci from the Royal Collection,” said Sean Rainbird, Director, National Gallery of Ireland.

“We are expecting large attendances at the exhibition and encourage visitors to pre-book their free ticket online, and to do so early in order to avoid disappointment.”

President Michael D Higgins has been among visitors and several dates are booked out already.

Next weekend (Sunday 15 May) there will be a free lecture Leonardo and the Italian Renaissance with Dr Philip Cottrell of University College Dublin.

This is part of the free lecture series that runs throughout the months of May and June in association with the exhibition. 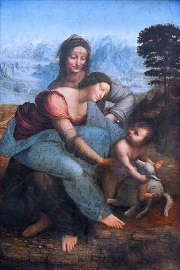 The Royal Collection Trust which owns the drawings visiting Dublin, states that the black chalk drawing was probably completed between 1510 and 1515.

It is of an older St Anne and, as per the customs of the time, she had a covered head.

Leonardo liked painting decorative hairstyles but instead created an elaborately folded and twisted headdress. The drawing depicts the saint as conventionally demure with a downwards gaze.

Twelve autograph studies of details for the Louvre panel survive, together with several black-chalk landscapes that can be connected with the background of the painting.

The drawing for the head of St Anne, currently in Dublin, is different to the head in the painting but the headdress was retained with no significant change. 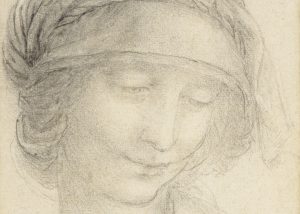 The subject of the Madonna and Child with St Anne preoccupied Leonardo for the last two decades of his life.

A commission for a painting on the subject may have come from the French king, Louis XII, after his occupation of Milan in 1499.

Over a period of time Leonardo worked on three separate full-size compositions.

One is called a “cartoon” and it includes the infant St John the Baptist and is in the National Gallery in London.

The Madonna and Child with St Anne and a lamb was probably worked on slowly from around 1508 onwards, and was seen in Leonardo’s studio in France when he was visited by Cardinal Luigi of Aragon on 10 October 1517.

On Leonardo’s death the painting, still unfinished in the foreground landscape and the lower drapery of St Anne was inherited by his assistant Salaì; it reached the French royal collection in 1636, when it was presented to Louis XIII by Cardinal Richelieu. 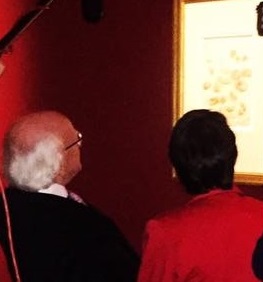 While these paintings are not in the Dublin exhibition, there are many examples of his activities into sculpture and architecture, engineering, botany, geology, hydraulics, optics and anatomy, all of which he explored in drawing.

Many of the drawings are extensively annotated, including the sheet of Studies for casting the equestrian monument to Francesco Sforza (c.1492-4).

There is a double-sided page from a notebook of anatomical studies: The heart compared to a seed and The vessels of the liver, spleen and kidneys (c.1508).

An illustrated catalogue to the exhibition by Martin Clayton, Head of Prints and Drawings at the Royal Collection Trust. There is also a programme of free public talks, tours and drawing workshops during the exhibition.

The National Gallery of Ireland is the only Irish venue for this touring exhibition, which has been organised by the Royal Collection Trust which is a department of the Royal Household. To book: www.nationalgallery.ie