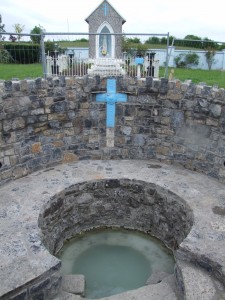 Up to 1,000 people are expected to attend the annual Ladywell Novena which commences this Saturday evening with Mass at the Co Laois shrine near Ballinakill.

Ladywell now has its own website and the historical content is based on a booklet written by father and daughter team, Julie and Dermot Dorgan.

Julie is the sacristan in the local parish of Ballyragget and helps at the shrine during the novena.

“The (novena) tradition goes back generations; people come from Tipperary, south Kilkenny, and all the counties around,” she explained to CatholicIreland.net.

“It brings big crowds, and the last few years we have had different speakers to talk on a number of different themes.”

This year, priests from the locality and further afield will officiate at the ceremonies each evening.

On Sunday, the very well known composer and singer, Fr Liam Lawton, will be present and the celebrations will conclude with newspaper columnist and vocations co-ordinator, Fr Willie Purcell, on Sunday 8 September.

As well as the novena, many visit the shrine during the day or the evening when it is quiet. “It’s not just about crowds,” according to Julie Dorgan. “It is probably one of the most peaceful places you will find.”

“I live in the countryside where it is quiet, but there is a peace at Ladywell. A lot of people, who are not fond of crowds, visit in the middle of a working day or they even go at midnight and just sit there. They always remark how peaceful it is.”

According to Dermot Dorgan, “There are no big cures or anything but still the people have a great devotion.”

He told CatholicIreland.net, “It is one of the holy wells in the country that has survived. There is a tradition going back hundreds of years and it has developed over the years from small minor gatherings a century ago into quite a big thing nowadays.”

He explained that following a period of decline, a public rosary was said during the 1940s at Ladywell and from then on the crowds improved. 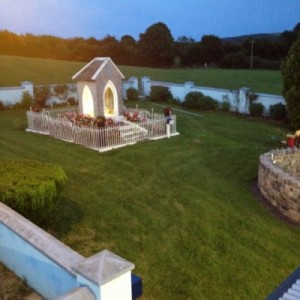 Although only a short distance from the town of Ballinakill, Ladywell is in the parish of Ballyragget and the Diocese of Ossory.

The committee has worked hard on improving the site and increasing cover to shelter pilgrims from bad weather.

A permanent altar was erected in 2007 and an office/meeting room was also built. These improvements and the upkeep and preparation of the shrine in advance of the novena would not be possible without a dedicated committee.

A new era in devotions began at Ladywell in 2001 with the introduction of the novena and guest speakers.

This year’s events began with the traditional 15 August Mass on the Feast of the Assumption. They continue with ceremonies every night at 8pm from Saturday 31 August until Sunday 8 September.