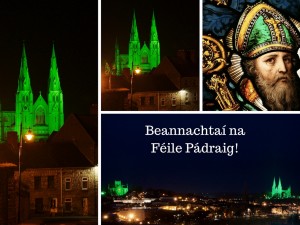 Although a small number of people are attempting to drag Ireland back to unrest and violence, the majority of people across the country’s communities are “strongly committed to building bridges towards lasting peace”, the Primate of All Ireland has said.

In his St Patrick’s Day message from the Cathedral City of Armagh, the place where St Patrick began his mission in Ireland and established the city as the spiritual capital of the island, Archbishop Eamon Martin issued a ‘Céad míle fáilte romhaibh!’ to migrants who have made their home in Ireland.

He also sent St Patrick’s Day greetings to all Irish people at home and abroad and all who celebrate Ireland’s patron saint, as he underlined that St Patrick himself first encountered Ireland as a migrant.

The Archbishop said that in this 1916 centenary year, as the country reflects on all that it has become and all the Irish people have achieved as a nation, “we have much to thank God for”.

But he also highlighted that the Ireland of 2016 faces many challenges – including poverty, homelessness and huge pressures on family life – which can so easily lead to a sense of despair and hopelessness for many of people.

Archbishop Martin said he was reminded of the words which Pope St John Paul II spoke to the late President of Ireland, Dr Patrick Hillery, where he said: ‘Modern Ireland was founded on a vision of a society capable of responding to the deepest aspirations of its people and ensuring respect for the dignity and rights of all its citizens. That vision is linked to a profound yearning for the effective realisation of the profound human values that have never ceased to resound in the minds and hearts of the Irish people.’

“As we reflect on St Patrick’s life and mission in the Year of Mercy, we remember Patrick’s deep personal sense of God’s mercy and his desire to spread that mercy to others,” the Archbishop of Armagh said.

“In bringing the message of Christianity he was sustained by his friendship with God the Father and a profound sense of Christ’s presence surrounding him – so eloquently expressed in the beautiful prayer: St Patrick’s Breastplate.”

“Following the example of Patrick, I call on Irish people, at home and abroad: open yourselves up to a personal friendship with Christ and to an experience of God’s mercy in your lives,” he urged.

The Archbishop added that as Irish people, we cannot think of Patrick – the captive, the slave in exile, the undocumented, the migrant – without acknowledging the enormous humanitarian and pastoral challenges facing growing numbers of people who find themselves displaced and without status in our world.

“This is so shockingly exemplified by the refugee crisis here in Europe. I ask you to pray for refugees and for all displaced families at this time,” he appealed.

On the feast of our national patron, the Primate of All Ireland also highlighted in particular the plight of Irish emigrants throughout the world.

“This past year, following the tragedies at Berkeley, we have become especially aware of the great work undertaken by Irish emigrant chaplaincies in the United States, Britain and Australia.”

He said they provide essential pastoral outreach to many Irish people as they try to establish a foothold in a new society.

The Archbishop of Armagh concluded his message with the following blessing:

As part of the 10-day St Patrick’s Festival currently taking place across Armagh, Downpatrick and Newry, both the Catholic and Church of Ireland St Patrick’s Cathedrals in Armagh City have been lit up in green lighting.

According to tradition, St Patrick built his first church in Armagh in the year 445BC. The Church of Ireland cathedral now stands on the site of this early church.

The St Patrick’s Festival will continue across Armagh, Downpatrick and Newry until 20 March. For more on the festival please see www.armagharchdiocese.org