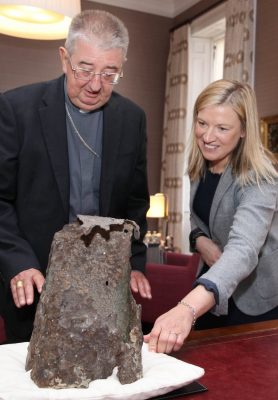 Archbishop Diarmuid Martin of Dublin handed over a broken bell to the National Museum of Ireland (NMI) yesterday.

The bell’s worn appearance can be explained by its age: it dates from the 8th or 9th century.

It is known as ‘the Knockatemple Hand-Bell’ because of where, during excavations in 1879, it was found seven miles from Glendalough at a site containing the foundations of a two-aisle stone-paved church.

It is said that a priest of the pro-Cathedral bought the bell at auction in 1915 and it was described by the antiquarian priest Fr Myles V Ronan as a “square headed bell in iron, consisting of two portions the halves being riveted together; there are also traces of bronze plating”.

That mention of the bell by Fr Ronan in a 100-year-old antiquarian journal set modern-day medieval antiquities curator Cormac Bourke at the Ulster Museum in Belfast thinking and he made contact with the Dublin Archdiocese.

Archbishop Martin wrote to the NMI, alerting them to the existence of the bell and offering to donate it to the NMI collection.

Maeve Sikora, Keeper of Irish Antiquities at the NMI, said the museum was honoured to receive the “important donation”, which will now be held securely “for future generations” in the national historic hand-bell collection.