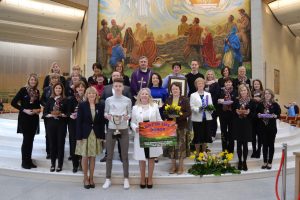 Many who had received organ transplants, their families, those still waiting for a transplant and relatives of deceased donors attended the Mass in the basilica.

The idea for a celebration came from Bernadette McNeive, whose son Matthew received a kidney transplant at the age of eleven. She said she was not surprised that there were so many at the Mass.

“It never ceases to amaze me the number of people who are affected by transplant and organ donation, be it living or deceased donors. So I was delighted with the crowd, but I think it was the tip of the iceberg,” she told Catholicireland.net.

“Above all it was about thanking God for the gift of life, and thanking deceased and living donors. Matthew’s life was so different when he was on dialysis than it is now.”

He has become a sportsman, accomplished in table tennis and athletics and, like so many of his peers studying for the Leaving Certificate, he was taken up with oral exams in the week after the Mass.

Bernadette McNeive spoke of how life for her family had been affected initially by Matthew’s sickness and how that improved following his kidney transplant. Matthew presented one of the gifts at the altar during the Knock Mass. 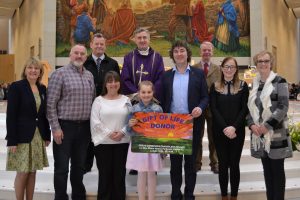 Bernadette McNeive is so appreciative of the gift of organ donation that she has always had a Mass said for the person who donated a kidney to her son, and for the donor’s family.

“I appreciate that Matthew’s donor was a deceased donor and on the anniversary of his transplant I would regularly have a Mass said for his donor,” she explained.

Knowing that there are hundreds of families like her own, and being a parishioner of Knock, it was quite natural to consider Knock Shrine when the idea of a special Mass to celebrate organ donation was discussed with Monica Morley, Director of the Family Centre at Knock Shrine. By coincidence, the first available date was at the start of Organ Donor Awareness Week.

The special Mass included bringing symbols to the altar representing the different participants in the organ donor experience, personal testimony, and distribution of purple ribbons in memory of all deceased donors. All 2,000 organ donor cards available at the event were given out.

It is planned that this Mass will become an annual event at Knock Shrine as part of Organ Donation Awareness Week and will be one of many special events organised by the Family Centre at Knock Shrine.