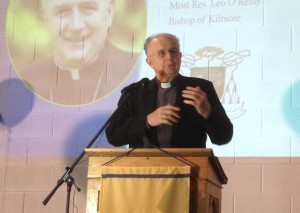 The Church is detached from peoples’ lives and needs to be more ‘family friendly’ with priests who exercise a ministry of teacher and guide, as opposed to a dictatorial role.

Those were some of the findings of a listening survey in Kilmore diocese, which was conducted over the past 18 months with active lay parishioners as well as those who consider themselves Catholic but may not attend church regularly.

“There was a serious effort made to reach out to those who would not normally come to Church. The feedback from those listening sessions in the parishes gives us the context in which many people live out their lives in our society today and the context in which we must try to preach and live out the message of Jesus,” Bishop Leo O’Reilly said, as he welcomed more than 300 delegates to the Kilmore Diocesan Assembly, where the findings of the survey were revealed.

Other issues raised included the view that the Church is overly male-orientated and devaluing of women.

It was suggested that a married clergy and women priests might be better able to connect with and communicate with people today, especially in liturgies, which should also be enriched with trained lay people.

Fr Michael Router, PP Bailieborough, presented the findings stating that one point all survey respondents agreed on was the strain in their lives in finding the correct balance between material needs and emotional and spiritual well-being.

The survey found that older people have developed resilience over time and have lower expectations. They are faithful, but not uncritical of their Church. They are grateful for what they have but mourn the loss and security of traditional values.

Younger people highlighted a lack of direction in their lives and the difficulties of deciding who they can trust, since the pillars of the past have failed them.

Social media, while it promises much, cannot provide the real relationships and deeper value system of an integrated community.

Another speaker, Fr Enda Murphy highlighted “a cause of grave concern” namely the dwindling and aging number of priests.

In 1950, Kilmore had 140 diocesan priests and for much of the first half of the 20th century was ordaining 4 men a year. Now this has fallen to 76 with only 5 ordinations in the first decade of the 21st century.

The need to address this situation was very much part of the Kilmore Diocesan Assembly which had the theme Walking Together; Building the Kingdom; Professing Our Faith. It was held at the weekend (25-26 October) at St Patrick’s College, Cavan.

Bishop Leo O’Reilly welcomed everyone quoting Pope Francis’ words: “I dream of a ‘missionary option’, that is, a missionary impulse capable of transforming everything, so that the Church’s customs, ways of doing things, times and schedules, language and structures can be suitably channelled for the evangelisation of today’s world rather than for her self-preservation (EG 27).”

Those present reported that the Assembly was marked by a great openness and respect both in the discussions and in the quality of listening. Discussion groups of 6-7 people discussed the results of the listening survey and many other topics. 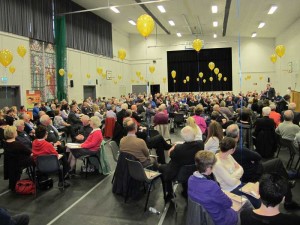 In his address, Fr Michael Drumm emphasised the need to understand sacraments as means of grace and healing for the wounded and not the perfect.

He suggested that in the light of recent difficulties in the Irish Church, the challenge Kilmore was to let go of some structures so as to be free to be a missionary community speaking a gospel message that was understandable to today’s culture.

Matthew McFadden of the Clogher don Oige youth ministry team outlined how over a ten-year period the youth programme in the diocese of Clogher was transformed.

One secret to its success was the involvement of a sizeable number of people under 22 years of age on the administrative committee who always carry through on proposals and ideas.

On Sunday, the Assembly Mass was held in the Cathedral of St Patrick and Felim and the principal celebrant and homilist was Bishop Leo O’Reilly, who was joined by priests of the diocese, assembly delegates, and parishioners from local Urney and Annagelliff parishes.

The final speaker was Breda O’Brien who shared her own story of faith but also talked about where she sees the Church in Ireland today.

She acknowledged the survey findings which spoke of the struggle many people face in the modern Ireland and suggested that meetings those struggles is where the Church could be at its best.

Concluding Bishop O’Reilly spoke of his great sense of hope from the two days. He assured the delegates that their concerns had been heard and action would follow on including:
– welcome to those on the margins of Church life;
– sacramental catechesis for parents and children;
– engagement and work with young people;
– a look at material resources given the shortage of priests and lack of vocations.

The recommendations of the Diocesan Assembly will now be taken forward by the Diocesan Pastoral Council to formulate a pastoral plan for the diocese.