Kilmainham Gaol is a ‘Sacred Space’ 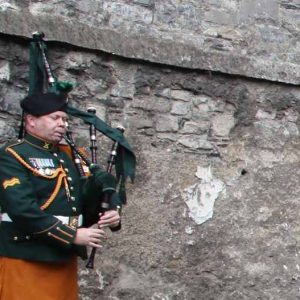 We should make the dream of 1916 a reality, said Archbishop Diarmuid Martin of Dublin at a Mass in Kilmainham Gaol, where he described the national monument as a sacred space.

The Stonebreakers’ Yard, where the 1916 leaders were executed, and the walls of the gaol around it are sacred because of the extraordinary faith that was shown here when all else seemed to be dominated by brutality, said the Archbishop, who had an uncle who fought in the uprising.

Speaking in the gaol’s chapel, Dr Martin said: “Kilmainham Gaol was a place of harsh punishment and death. It was also a place of nobility and idealism and of those things which represent the deeper dimensions of humanity. Each of those who was executed here was a person of faith. It varied from the mystical poetry of Plunkett to the doubting faith of Connolly who found his peace with God right here in this chapel.”

Dr Martin said that “This is a place also where people accepted to face a violent death because they had a dream for Ireland. It was not a dream just for the Ireland of 1916, but it was a dream for us and for all the generations which will come after us also. Those executed here wanted us to benefit from their dream and for us then to realise our common dream for others.

“We have to ask ourselves each day, how have we given reality to that dream? What kind of Ireland do we want and what kind of Ireland have we achieved?  Dreams are never realised; the nature of a dream is to challenge us to move beyond ourselves in goodness and truth, solidarity and generosity.”

Speaking of society, he said that “No society will ever be the ideal one. It is of human nature that we fail sometimes through our own faults, sometimes through unforeseen circumstances. But the fact that we may never arrive at what is ideal, does not mean that we cannot and should not propose an ideal, a dream to which we can aspire and hope. The Gospel message about integrity is a vital one for defining what dream we wish for Ireland.”

Dr Martin said that “The dream must be a dream about peace and harmony. In these days again we witness almost every day examples of senseless violence: there is the cold and unscrupulous violence of people shot deliberately, often in their homes and before their families. There is the repeated violence of stabbings, tragedies often unplanned, but nonetheless senseless and bringing tragedy to all involved. This violence attains nothing and as citizens we must all rise up against it in whatever way we can.”

Among those present were members of the Kilmainham Gaol Restoration Society, who in 1960 saved the building from falling into ruin. Dr Martin told them: “We are all indebted to you. This building is a monument to the spiritual strength and the faith of the men and women who lived and died for an ideal which Irish men and women and children should be able to achieve. I am honoured to have been asked to celebrate with you this morning.”