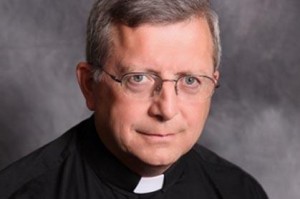 A Kilkenny-born cleric has been identified as the ‘miracle priest’ who attended a crash site in the USA and gave solace to a young victim and also anointed her as she was trapped in her car.

Fr Patrick Dowling is a priest of the Diocese of Jefferson City, for which he was ordained in 1982, though he was born in Ireland.

He was dubbed the ‘angel priest’ in media reports for his pastoral care of the young teenage women following the 4 August road accident in Missouri.

However, afterwards, no one seemed to be able to identify who he was.

The Catholic News Agency has now released an interview with Fr Dowling confirming he was the priest who came to Katie Lantz’s aid after her Mercedes was struck by another vehicle.

Rescue workers had spent an hour trying to get the stricken Lantz out of her vehicle when Fr Dowling came by the scene of the accident.

He was driving by on his way back from offering Mass in Ewing. “I had Mass in Ewing MO as the regular priest was sick. As I was returning, I arrived at the scene. The authorities were redirecting traffic. I waited till it was possible to drive up closer”, he explained.

“I parked behind a large vehicle about 150 yards from the scene. I asked the Sheriff’s permission and approached the scene of the accident.”

“I absolved and anointed Katie, and, at her request, prayed that her leg would not hurt. Then I stepped aside to where some rescue personnel and the rescue helicopter pilot was waiting, and prayed the rosary silently. I left when the helicopter was about to take off.”

Katie’s family and friends want to personally thank the priest whose identity has remained a mystery until now.

Fire Chief Raymond Reed even said the department took 80 photos of the scene and the priest did not appear in any of them.

Fr Dowling serves in prison ministry and also ministers to the Spanish-speaking population of the diocese.