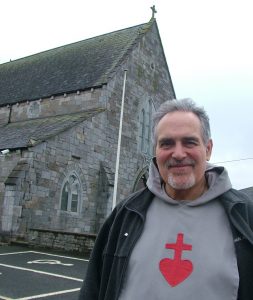 Fr Michael Shields grew up in Anchorage, Alaska, and became a diocesan priest, but in 1994 following a call from God to “Go and pray in the camps”, he set off on his own to establish the most eastern parish in the world, at the former prison camp city of Magadan in Siberia.

This week the priest, who is part of the Jesus Caritas fraternity of Charles de Foucauld, preached at two masses in the Kildare parish of Prosperous, before leaving for Knock where he will be the chief celebrant at the 3.00pm Mass tomorrow, Saturday, the Solemnity of the Epiphany, preaching on “One life is worth more than the whole world and you shall be my witness.”

Magadan, which lies on a peninsula on the Sea of Okhotsk in Nagayev Bay, is in north eastern Siberia.  It has two ports, including a deep water bay, which made it ideal as a labour camp as prisoners could be transported by sea and then put to work in the gold mines.  The camps closed in the 1950s and today it is a relatively prosperous city of around 100,000 people living off the mines and  fishing. It is however, very isolated.  For the Catholics there, “the Church is their family”.

Each year, Fr Shields, supported by Aid to the Church in Need, makes a long trip to Europe, and sometimes the US to raise money for his small but vital parish. Numbering about 200 families, the Parish of the Nativity covers a huge area – the size of France. “Mind you 90% of the area is completely inaccessible as there are no roads,” he told CatholicIreland. About a quarter of the city’s population is Russian Orthodox, but he explained, many by tradition rather than faith.  In 1989 with the collapse of Communism, people were looking for an identity, he explained.  They found this in the Russian Orthodox Church. “People were baptised by their thousands. But it was cultural not faith.” About 2% go to church.

For some years, Fr Shields was accompanied by two other priests, also members of Jesus Caritas in his mission, but for the last eight years he has been the only priest. “The hardest part is not going to confession regularly.” he says. But he does not live alone, two lay people are with him, also living the spirituality of Blessed Charles. They call themselves ‘Poustinik’ (the Russian word for desert). Each morning they rise at 5.30am for adoration and the day is punctuated with moments of prayer and outreach – for example with ‘street people’ who live in the basements of apartment blocks near hot water pipes so they don’t freeze to death as temperatures in Magadan are sub zero for almost eight months of the year (down to -30 at times. The summer months rise to around 11 or 12 degrees celsius). 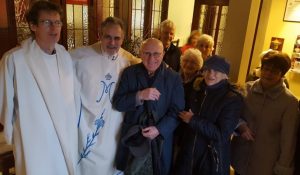 There have been two vocations since his arrival in 1994 – one to the Jesuits and one to religious life – Sister Ilita.  Fr Shields told her story at the Mass in Prosperous.  Aged five, she appeared at the back of the church and used to come up for a blessing at communion time. Gradually she sat closer and closer to the altar. Eventually one day, now aged five and a half, Ilita refused to leave the altar after her blessing. “Why don’t you give me Jesus?” she asked.  With her parent’s permission Fr Shields began to instruct her in the faith, she was baptised, received the sacraments, and as a young woman joined a religious order.

However people like Sister Ilita are rare. “The culture is so broken. The communists destroyed the family,” said Fr Shields. “There is brokenness, high divorce rates, infidelity. My hope for vocations lies with the young people and the future.”  He has around 20 young people in his parish who live real lives of faith, not drinking or smoking, for example. “They are a seed of hope, their lives are good Christian lives.” He sees his work as a work of God and is not dispirited by the slow growth. “There is not a huge outpouring of hunger [for faith] or an outpouring of interest. We go ahead one soul at a time.”

His parish is the most eastern parish in the world. “We celebrate the first Christmas and Easter Masses,” he says. It is appropriate then that Fr Shields will be speaking in Knock at the Epiphany, recalling the Wise men of the East who came to visit Jesus.