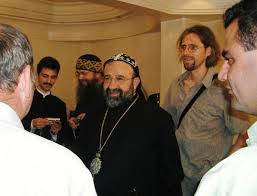 Two Syrian bishops kidnapped in April by rebel forces are reported to be still alive according to one news agency which specialises in Middle Eastern affairs.

The AI-Monitor claims that Syriac Orthodox Metropolitan, Mar Gregorios Yohanna Ibrahim, and Greek Orthodox Archbishop Boulos al-Yazigi, both of Aleppo, are being held in an area under rebel control near the Turkish border.

Meanwhile, Pope Francis met the Greek Orthodox Patriarch of Antioch, Youhanna X Yazigi, the brother of one of the two bishops who were kidnapped in Aleppo in April.

The Patriarch is the brother of Archbishop Boulos al-Yazigi. The Syrian prelate informed the Pope of the continuing suffering of Christians in Syria.

Fifty-eight year old Youhanna X Yazigi from Latakya was appointed head of the Patriarchate, which has its See in Damascus, last December. As such he is leader of all Greek Orthodox communities in the Middle East.

Speaking after his meeting in the Vatican, he said, “We try, we want to do what we can do, all together – this is the desire of His Holiness, and our desire.” He said the presence of Christians in the Middle East was dwindling because “a lot of our people are leaving Syria or Lebanon for other countries, and we cannot accept the Middle East without the face of Christ.”

He called on Russia, the US and Europe to help push for a solution in Syria through peaceful dialogue.

Patriarch Yazigi stated that although he does not fear for his safety, there are still areas where it is difficult to minister or hold liturgies in Syria, especially in Aleppo and Homs.

In recent weeks, the Apostolic Vicar of Aleppo, Mgr Giuseppe Nazzaro, had said he feared the two prelates were dead, echoing a widespread fear across the Syrian Christian community.

According to Al-Monitor, an official source in Beirut has confirmed that Turkish intelligence services have seen the bishops alive and apparently know where they are being held.

According to Al-Monitor, Youhanna Ibrahim and Boulos Yazigi are apparently in an area near the town of Azaz, close to the Turkish border and are apparently being held by the group of Chechen guerrilla fighters who kidnapped them.