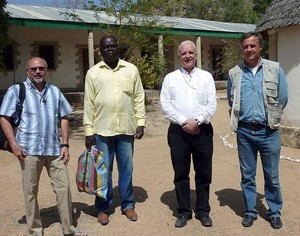 The two priests who had been kidnapped, Gianantonio Allegri, left, and Giampaolo Marta, right, in January near Maroua. Credit Diocesi Vicenza

Two Italian priests and a Canadian nun, kidnapped in Camaroon on 5 April were released on Sunday.

In a statement the Italian Minister of Foreign Affairs, Federica Mogherini, confirmed the release of Fr Gianantonio Allegri and Fr Giampaolo Marta from Italy and Canadian Sr Gilberte Bussier.

The three were kidnapped by gunmen from the building where they were staying in the district of Maroua in Northern Cameroon in the early hours of 5 April. No group claimed responsibility for the attack but suspicion has fallen on militant Nigerian group Boko Haram who kidnapped another priest as well as seven members of a French family in northern Cameroon last year.

The group use the area of North Cameroon as a rear base to attack villages across the border in northern Nigeria.

Federica Mogherini said: “It ‘a great joy. I first thank the authorities of Cameroon President Paul Biya for the great work done and the Government of Canada with whom we have worked closely. I want to express my great satisfaction for the success of an operation conducted brilliantly, thanks to the continued cooperation between our intelligence services and the Crisis Unit of the Foreign Ministry.”

The minister would not discuss the terms under which the three were released. But past kidnappings of Europeans by Boko Haram in northern Cameroon have involved the release of prisoners in return, along with payments of cash. The three were flown to Cameroon’s capital, Yaoundé.

A spokesman for the Vatican, the Rev. Federico Lombardi, said news of the captives’ release “fills us with joy.” He said the Pope had been following the kidnap from the beginning.

“Let us thank the Lord that this event has reached a positive conclusion,” he said . “At the same time, let us continue to pray and commit ourselvelves so that every form of violence, hatred and conflict in the different regions of Africa, and other parts of the world, may be overcome.”

The news was greeted with great joy in Vicenza where a Bible Festival was taking place this weekend, and where a prayer vigil had been planned for their release.

“We are experiencing a great joy, and we cannot but express our thanks to God for their freedom,” said Fr Ampelio Crema, President of the Festival.