Home > News > It was clear John Paul II was a saint: Pope Emeritus

It was clear John Paul II was a saint: Pope Emeritus 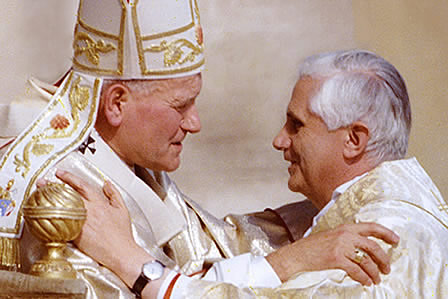 Pope Emeritus Benedict XVI has said it became clearer to him the longer he worked with Blessed John Paul II that he was a saint.

Next month, Blessed John Paul II will be canonised a saint.

In a 12-page interview on the topic of his years with the Polish pontiff, the former Prefect of the CDF said, “John Paul II did not ask for applause, nor did he ever look around, concerned about how his decisions were received. He acted from his faith and his convictions and he was ready also to suffer the blows.”

The interview appears as part of an Italian-language collection titled, ‘Accanto a Giovanni Paolo II. Gli amici & i collaboratori raccontano’ or ‘Beside John Paul II: Friends and Collaborators Speak.’

The book is so far only available in Italian.

In extracts of the interview published by ZENIT, Benedict XVI recalls his first meeting with Karol Wojtyla, their working relationship, and how John Paul II firmly backed him following the publication of Dominus Iesus in 2000.

“Naturally, one must first of all keep in mind his intense relationship with God, his being immersed in communion with the Lord, of which he hardly spoke,” the Pope Emeritus recalled.

“From here came his happiness in the midst of the great labours he had to sustain, and the courage with which he fulfilled his task at a truly difficult time.”

He adds, “The courage of the truth is in my [judgment] the criterion of the first order of sanctity.”

“Only from his relation with God is it possible to understand his indefatigable pastoral commitment. He gave himself with a radicalism which cannot be explained otherwise.”

“His commitment was tireless, and not only in the great trips, whose programmes were dense with appointments from beginning to end, but also day after day, beginning with the morning Mass until late at night”

“During his first visit to Germany (1980) I had a very concrete experience of this enormous commitment. During his stay in Munich, I decided he should take a longer break at midday. During that interval, he called me to his room. I found him reciting the Breviary and I said to him, ‘Holy Father, you should rest’, and he said, ‘I can do so in Heaven.'”

Benedict XVI said only one who is “profoundly filled with the urgency of his mission can act like this.”

“Often he would have [had] sufficient reasons to blame me or to put an end to my [tenure as] Prefect [of the Congregation for the Doctrine of the Faith],” the Pope Emeritus recounted of the negative reaction to Dominus Iesus.

The volume features the recollections of more than a dozen of the soon-to-be canonised Pope’s friends and closest collaborators.

It also includes the former Director of the Press Office of the Holy See, Joaquin Navarro-Valls, John Paul II’s life-long friend, Wanda Poltawska, and the postulator of his Cause for Sainthood, Fr Slawomir Oder and others.

In November of 2013, Pope Emeritus Benedict XVI agreed to answer Polish journalist Wlodzimierz Redzioch’s questions in writing about the late John Paul II. He did this by January 2014.

The Pope Emeritus also personally verified the Italian translation of the original German text of his answers.

Among the topics covered in the interview are: the work Blessed John Paul II and the then Cardinal Ratzinger did to respond to liberation theology; their work on the Catechism of the Catholic Church; the most important aspects of Blessed John Paul II’s spirituality; the decision of the Pope Emeritus to open his predecessor’s Cause; the spirit of gratitude that pervades his memory of the man he served and succeeded.

These included the Pope Emeritus’s recollection of the great faithfulness and support Blessed John Paul II showed him especially in the most trying of circumstances.