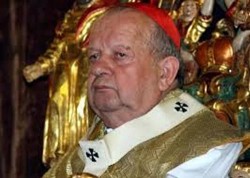 Some of  the writings of Blessed John Paul II, which he had asked to be destroyed, are to be published in February.

Cardinal Stanislaw Dziwisz the then Personal secretary to John Paul II, now Archbishop of Krakow, said he “did not have the courage” to destroy all of the notes after the pope’s death. The cardinal was also motivated to preserve them because of the “despair of historians” when the letters of Pius XII were burned after his death according to his wishes.

The cardinal said, “What had to be destroyed, was destroyed. And what had to be saved, for the benefit of humankind, has been saved.”

Polish news agency KAI was told by the cardinal, “..they are the key to interpreting his spirituality, his innermost self: his relationships with God, others, and himself.”

Cardinal Dziwisz also gave them to the Congregation for the Causes of Saints, for the process of his canonization. 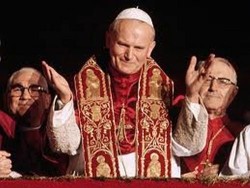 One period covered in the late Pope’s notebooks is the conclave in which he was elected Bishop of Rome. At that time his friend, Bishop Andrzej Deskur had a stroke which left him paralyzed on the left side of his body. The two had both been priests in Krakow since Bishop Deskur’s ordination in 1950 and the then Cardinal Wojtyla visited him in hospital following the stroke. Two days later he was chosen to be Pope.

He wrote: “The sacrifice of Andrzej, my brother in the episcopate, seems to me a preparation for the fact. Through his suffering, all this has been placed within the mystery of the Cross and Redemption carried out by Christ.”

This and many more of the private writings and papers of Bl. John Paul II will be released in Polish under  the title “I am so much in God’s hands. Personal records 1962-2003”.

The book  being published on 5th February by the Krakow-based publisher Znak, includes meditations from two of the late Pope’s notebooks, dating from between July 1962, when he was auxiliary bishop of Krakow, to March 2003, two years before his death, and in the 25th year of his service as Roman Pontiff. 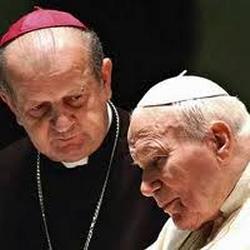 A CNA published interview with Znak revealed that the book contains “the most important personal, innermost questions and moving reflections and prayers that marked (the Pope’s) everyday life.” This includes “notes that show his concern for those dear to him – friends and collaborators – and for the Church that was entrusted to him.”

Znak said they were honoured to be publishing the book, and noted that its editors, Agnieszka Rudziewicz and Anna Szulczynska, had taken great care in their work. Part of the challenge of its editing was that later entries, in particular, were written in languages other than Polish. Card Dziwisz authored the foreword of the book, in which he wrote, “I faithfully followed the Holy Father’s will after his death in 2005, by distributing all his possessions, particularly his personal mementos.”

“However, I did not have the courage to burn the notebooks he had left behind, because they contained important information about his life.”