Home > News > Jesuit challenges some of the myths around prayer

Jesuit challenges some of the myths around prayer 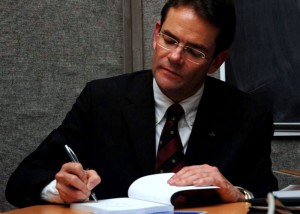 The Director of the Australian Catholic Film and Broadcasting Office who is also the author of ‘Where the Hell is God?’ is in Ireland this week to promote his new book.

In it the Jesuit explores the question of why we pray and what does praying do for us, for God and for the world.

Once again, Fr Leonard adopts a style which is forthright and challenging, as he illustrates his position with true stories that according to some reviewers sometimes read like fiction.

He is, according James Martin of America magazine, “clear, pastoral, provocative, consoling blunt and faithful – all at once.”

One aspect of his new book which is likely to generate debate is his depiction of the founder of his own Jesuit order, St Ignatius.

He tells the story of how the Saint was almost a murderer except he let his donkey make a crucial life and death decision.

Of St Ignatius’ time in a cave after his conversion experience he writes, “We know Ignatius the penitent whipped himself three times a day for months, wore an iron girdle, fasted on bread and water which he begged, slept very little and then on the ground, spent up to seven hours on his knees at prayer, covered his face with dirt, grew his hair and beard rough, and allowed his dirty nails to grow a grotesque length.”

“We also know that he suffered from scruples so badly that he considered committing suicide by throwing himself in the River Cardonner. We would diagnose the 1522 Ignatius as being an at-risk self-harmer, suffering from an acute depressive disorder and exhibiting suicidal behaviour.”

Yet Ignatius, with the help of a Dominican, went on to become a mystic and saint whose experiences helped him to leave a legacy of prayer and a spirituality that has helped millions of people.

Richard Leonard is, in addition to being the Director of the Australian Catholic Film and Broadcasting Office, also a lecturer in film and media at the University of Melbourne.

In 2003, he was a visiting scholar at the School of Theatre, Film and Television at UCLA.  He is chief film critic for a number of Australian Catholic newspapers.

He has served on juries at the Berlin, Hong Kong, Brisbane and Melbourne International Film Festivals and has lectured on film and culture across Australia and the Pacific, the UK, Ireland and the USA.

He is the author of ‘Movies that Matter: reading film in the light of Christian faith’ (Loyola University Press, Chicago) and a book on how to preach well entitled ‘Preaching to the Converted on Sundays and Feast days Throughout the Year’ (Paulist Press, New York).

When he returned from a year as visiting professor lecturing in communications in the Gregorian University in Rome he completed his award-winning book, ‘Where the Hell is God?’

It is a reflection on how to reconcile suffering with the notion of a loving God and he wrote it on foot of a tragic accident which saw his 28-year-old sister Tracey, a former nurse with Mother Teresa in Calcutta, rendered quadriplegic.

Controversy followed with some people accusing him of not believing in the power of prayer. That spurred him to write his latest book, ‘Why Bother Praying?’ and reviews suggest it is a fresh and challenging outlook on prayer.

While he is in Ireland he will be offering some answers to the question he poses in its title of his new book in Dublin, and Knock, Donegal and Derry.