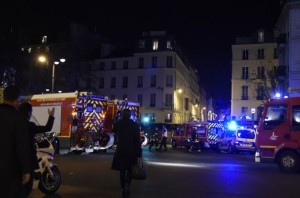 The Primate of All Ireland, Archbishop Eamon Martin, has issued a statement expressing his shock over the terror attacks in Paris which left 127 dead and 200 injured.

The Archbishop said on Saturday morning, “Our thoughts and prayers are with the people of Paris today and we express our solidarity with the French community living here in Ireland.”

He said once more “We are all shocked and deeply saddened to hear about terror on the streets of Paris. The sounds and images of these attacks make for frightening viewing.”

“Like myself, many Irish people have relatives or close friends living in Paris and have happy memories of visiting this beautiful city.”

“I ask everyone to remember, at Mass and in prayer this weekend, all those who have died and their families. We also pray for those injured and all who are caring for them.”

“These horrific events challenge us to pray and work even more earnestly for an end to the evil of terrorism everywhere. Each of us by our own thoughts, words and actions is called to spread mercy, love and peace so that the horrors of evil shall never conquer the world.”

“May Saint Denis and Saint Genevieve, patron saints of Paris, intercede for us.”

In Dublin, the Primate of Ireland, Archbishop Diarmuid Martin, celebrated Mass at 11am in St Mary’s Pro Cathedral and remembered the victims of the Paris tragedies and prayed for the injured, their families, friends and the people of France.

A Book of Condolence has been opened at the Pro Cathedral at the shrine of St Laurence O’Toole.

In a statement, the Archbishop of Dublin said, “The events which took place last night in Paris are a horrific example of what fundamentalism can do and what happens when religion is distorted for ideological reasons.”

He warned that, “Faith which does not foster questioning in our hearts and which becomes an ideology opens the path to dangerous fundamentalism.”

Pope Benedict, he recalled, highlighted that “the pathology of religion is the most dangerous sickness of the human spirit”.

He also reminded the faithful that St Laurence O’Toole, whose feast day is celebrated today, was a European peace-maker in his time: an Irish bishop who died in France on a mission to the Norman King to secure peace for his native Dublin.

“We remember those who died last night and those who mourn them and we share in the grief of the entire city of Paris.  I ask that prayers be said in that intention in all Churches over the weekend.”

Pope Francis sent a telegram on Saturday morning to Cardinal André Vingt-Trois, Archbishop of Paris, assuring victims, their families and emergency personnel that he is united with them in prayer.

In the telegram the Pontiff condemns this and all acts of violence, and asked God to inspire thoughts of peace and solidarity.

The telegram, which is signed by Cardinal Pietro Parolin, Vatican Secretary of State, states that Pope “vigorously condemns violence”, which cannot solve anything, and “he asks God to inspire thoughts of peace and solidarity in all and to impart on families in this trial and on all of the French people, the abundance of His Blessings”.

Describing the attacks as “horrific” the Pope assured the “suffering of families affected by the drama” and all of the personnel participating in aid efforts, of his spiritual closeness.

He also referred to the pain of the French people and “invokes God, Father of mercy, asking that He welcome the victims into the peace of His light and bring comfort and hope to the injured and their families”.

Speaking to TV2000 during a telephone interview on Saturday, Pope Francis said there could be “no human or religious justification” for the attacks in Paris.

He added that he found them difficult to understand.

Cardinal Vingt-Trois of Parish is to preside at Mass for victims on Sunday at 18.30 in the Cathedral of Notre Dame and the bells will ring in respect for them 15 minutes beforehand.