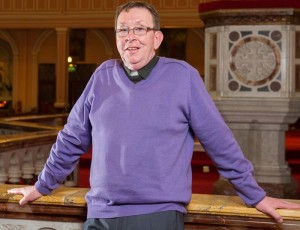 A parish priest in the diocese of Meath has shot to fame as a YouTube sensation, with over 31 million people viewing him singing an adapted version of Leonard Cohen’s Hallelujah at a recent wedding.

Fr Ray Kelly always loved music and singing, and appeared as part of the All Priests Show early in his priestly career. He also produced two albums of music for charity.

Four years ago at a wedding in Enniskillen, he heard the adapted version of Hallelujah sung by ten-year-old Lucy Pitts-O’Connor.

He was taken with the lyrics and asked the girl, a godchild of the bride, for a copy of the words.

From then on, Fr Ray sometimes sang the song at weddings ceremonies. “I must have sung it forty or fifty times over the last four years,” he told CatholicIreland.net.

For the wedding of Chris and Leah O’Kane on 5 April, Fr Ray had decided to surprise the couple with the song.

At the wedding rehearsal he noted the couple had a lot of music during the ceremony. “I might sing an old song for you myself,” he told them.

In the Youtube video (https://www.youtube.com/watch?v=XYKwqj5QViQ) when he begins to sing, people are at first confused.

“First everybody thought it was the girls [in the choir], but then a ripple went around ‘It’s the priest’,” he told Ryan Tubridy on the Late Late Show last Saturday.

People then thought he was miming to a tape, but then when he named the bride and groom in the song, their expressions changed to ones of disbelief and delight.

The video was posted on Youtube on 7 April, and almost immediately went viral, with people posting and sharing it on facebook and twitter. By yesterday, over 31 million people had viewed the clip.

Meanwhile, Fr Kelly’s life has taken off in an entirely unexpected direction.

He has been on Polish television over Skype and done an interview with New Zealand radio and is inundated with requests for interviews.

“I’m doing a magazine interview later and a television crew is coming down today to film a documentary,” he said.

Asked if he sees the hand of God in all this, or just a frenzied media looking for the sensation of the day, he ponders a moment.

“Possibly it is the Lord working in my life. He is working in all our lives. I do have a gift. I’ve been trying to use it in church for many years.”

His parishioners are delighted. “They are excited and say it is great to have something coming from a community in Meath,” he told CatholicIreland.net.

At the moment he said he’s “handling it with ease” but Easter ceremonies have meant that there has been “quite a bit of pressure to work around the parish life while dealing with all the media attention.” 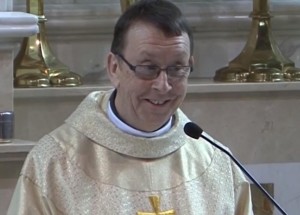 On the Late Late Show he said he had been inundated with requests from all over the world to repeat the song at weddings.

“From Chile, Japan, Lithuania, Latvia and Croatia, and they are all offering me a first class ticket. I’m going to have a great time!” he laughingly said.

He worked in South Africa and the United States, before returning to work in Ireland.

In 1993 he joined the Meath Diocese and he has been parish priest of Oldcastle since 2006.

He was recording a third album to raise funds for charity in his parish of Oldcastle when the video went viral.

He thought it would be his last album, but admits that with the new attention, this too may change.

“I was recording it at a local guy’s amateur studio but that may have to change now – a bigger organisation has booked me up,” he told the BBC.

The couple to whom Fr Kelly sang in the clip, Chris and Leah O’Kane, are delighted about the success of the video.

“I can’t believe how happy he has made our day,” said Leah O’Kane from her honeymoon in Mexico. “We’ll be down soon for Sunday Mass and we want that cup of tea he promised!” she added.