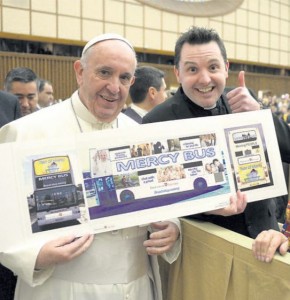 The Catholic Diocese of Salford in the North of England is using a mobile confession unit this Lent in the form of the double-decker ‘Mercy Bus’ to bring people back to confession.

The ‘Lenten Tour of the ‘Mercy Bus’ is the brainchild of an Irish priest, Fr Frankie Mulgrew, son of famed Irish comedian Jimmy Cricket.

During Lent, the bus will travel through the diocese with a priest on board, offering the public the chance to go to confession on the go without attending a church.

Just before the Mercy Bus set off on its Lenten campaign of penitence, Fr Mulgrew visited the Vatican where Pope Francis himself commended the endeavour and blessed photos of the bus.

Fr Frankie Mulgrew is a priest in the Diocese of Salford.

Indeed the Diocese of Salford’s Mercy Bus got off to a great start as it hit the road last Saturday.

Visiting Salford Shopping Precinct, it began its Lenten tour of the Diocese’s towns in response to the Pope’s call for a ‘Year of Mercy.’

Not even torrential rain could dampen the enthusiasm and curiosity of members of the public.

Around 100 people braved the weather to visit the bus for a blessing, to have their confessions heard, or simply to have a chat with priests on board. 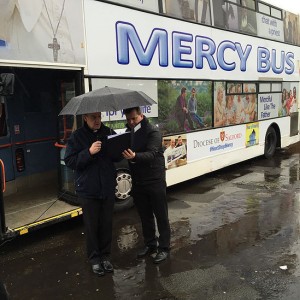 They took the chance to meet young volunteers, to listen to live music, or to take away medals blessed by the Pope.

Speaking about the bus initiative, the Bishop John Arnold of Salford said, “The Mercy Bus is a way of reaching out to people who might not otherwise have contact with the Church.”

He added, “We are going to them, rather than expecting them to come to us.”

The project is one of Salford Diocese’s practical responses to the ‘Year or Mercy’, in which the Pope has called for Catholics to make special efforts to witness to their faith and do good in local communities.

The bus will stop at a different location in the Diocese throughout every Saturday in Lent.

The bus was in Bolton Town Hall from 11am – 4pm on Saturday 13 February, and will be in Burnley on Saturday this weekend and Blackburn Town Centre on Saturday 27 February.