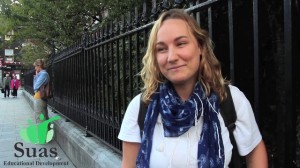 A newly released video shows that most Irish people want overseas aid to continue in spite of the recession.

The Suas Educational Development – Street Engagement video echoes the July 2013 opinion poll, which showed that a majority of people want the Government to deliver on its aid promises.

The poll, commissioned by Dóchas and undertaken by Ipsos MRBI, found that 77% think that “even in an economic down-turn, we have an obligation to invest in overseas aid”.  However, this is down on last year, when 82% of respondents held this view.

Three cities, three days, and three questions, form the basis for the video which is just released on Vimeo and highlights how Ireland’s budget for overseas aid has been cut by at least €222m since 2008. Ireland’s aid budget currently stands at 0.48% GNP.

“We have obligations to pitch in,” is one of the comments on the Suas Educational Development – Street Engagement video which features members of the public in Dublin, Cork and Galway.

“Our survey shows that – even in a downturn – three in four people want Ireland to deliver on its aid promise,” Dóchas Director Hans Zomer said.

“The Government has repeatedly stated that we must repair the damage to Ireland’s international reputation. We now have confirmation that 73% of people in Ireland feel our reputation abroad is helped by the fact that we want to keep our promises to the world’s poorest people.”

The IpSos MRBI survey, carried out in June, was based on interviews with a representative sample of 1000 adults. It shows that people also over-estimate the amount Ireland spends on overseas aid, with 31% of respondents indicating they think the aid budget amounts to more than 6% of national income – 12 times the correct figure of 0.48%.

Other comments on overseas aid include: “People don’t have money to give to aid with the downturn in the economy, and the knock on effect is the Irish Government has cut way back on its budget and obviously that is going to have a negative impact.”

And: “It might be bad here but I am going to go home and have my dinner, collect my dole on Wednesday. It’s ok, I have the option of having food when others mightn’t.”

The question on the importance of education drew responses such as: “Education is the building blocks for everything if you can’t get educated you can’t get on in life.”

As well as producing the video, Suas is also currently running a documentary 8×8 film festival on five university campuses across Ireland.

Suas supports quality education in disadvantaged communities in Ireland and in developing countries, so the thought provoking documentaries feature Cuba, Palestine and other troubled places and a range of issues.

One documentary titled ‘Town of Runners’ will be familiar to many who followed the Olympics in London.

It is about young runners from Bekoji – an Ethiopian highland town which has produced some of the world’s greatest distance athletes, including Tirunesh Dibaba, Kenenisa Bekele and Derartu Tulu.

Athletics offers young people the chance of a different life, and the film shows the ambitions of these Ethiopians living between tradition and the modern world.

The free documentary festival began in NUI Galway on the 23 of September and concludes in DCU on the 27 of October.